Two unique views, two singular books to discover a world at the end of the world: Greenland.

Olivier Laban-Mattei, the father, documents in his photographic book Neige Noire (Black Snow) the evolutions of the Greenlandic society confronted with the climatic upheaval, the foreign covetousness and a worrying social situation. He plunges the reader into a universe of shadows, inviting him to imagine the meanderings of these subtle and enigmatic souls for the foreign observer, to take seriously what these faces tell us, where violent lives are often read.

Lisandru Laban-Giuliani, the son, explores in his anticipation novel Variations in Major Solitude the future of Greenland as its inhabitants themselves describe it, fear it and desire it. From the testimonies and stories collected on the spot, he weaves a narrative as intimate as it is gripping of the possible futures for this island.

Beyond the documentary richness, this four-handed project proposes an original reflection on the transmission between generations and on the condition of isolated populations.

In 1931, an Inuit author, Augo Lynge, imagined Greenland in 2021 as a land of plenty inserted in a happy globalization and in symbiosis with the former Danish colonizer.
In 2021, on the occasion of the tercentenary of this colonization, we wanted to draw a portrait of this society facing brutal reconfigurations, accelerated climate change and the possibility of a self-determined future. 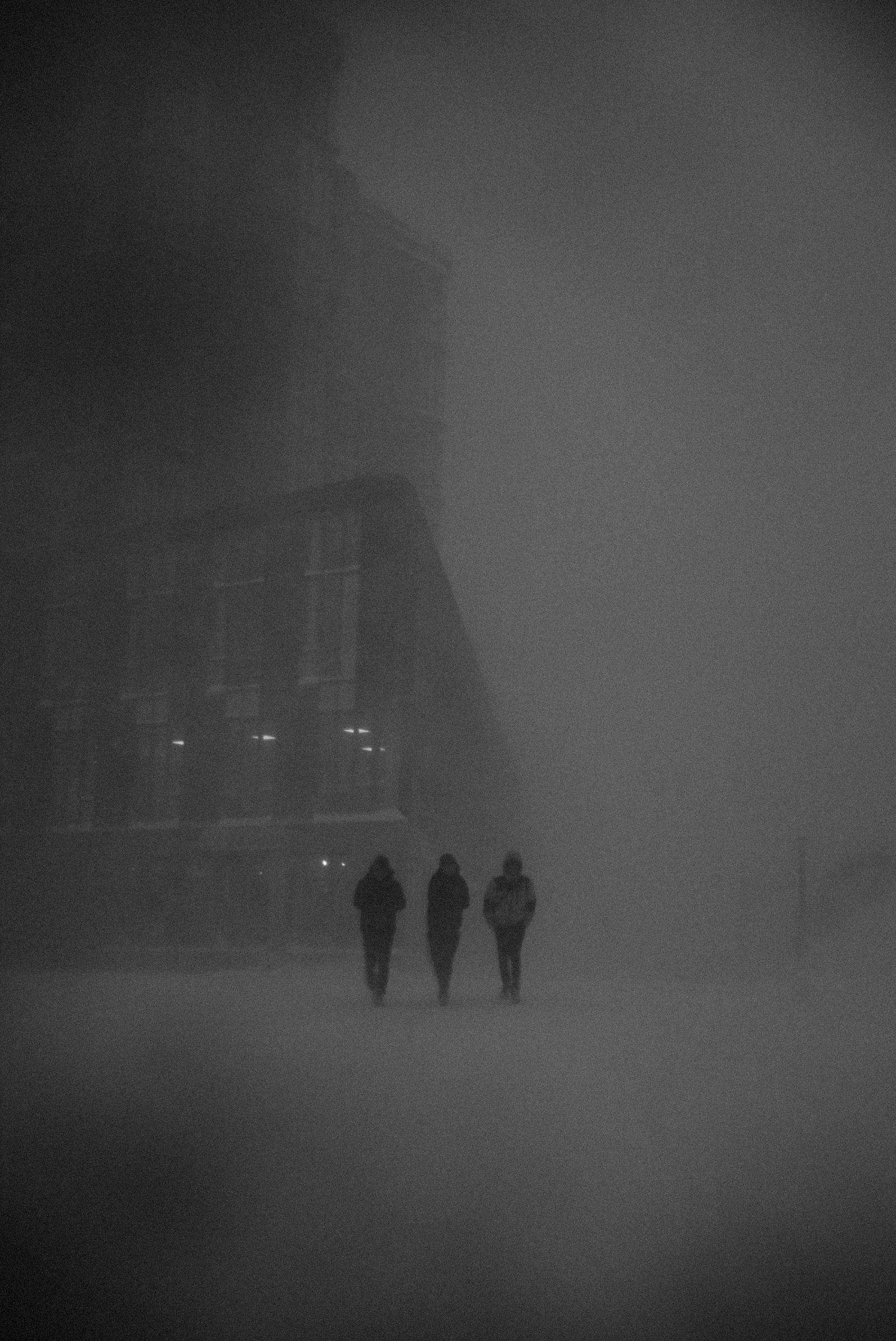 Despite increased autonomy since 2009, the stigma of colonization remains and is reproduced against a backdrop of high inequality and deep social unrest. The suicide rate among young people is the highest in the world. The population suffers from a lack of psychological help, especially to cope with addictions. Isolated fishing villages are being emptied in favor of the three main cities. In the capital, the housing shortage leaves hundreds of newcomers homeless. Everywhere, mining projects are multiplying thanks to the retreat of the winter ice pack, often accompanied by promises of income that would be sufficient to emancipate themselves from the Danish economic tutelage, even if it means sacrificing part of the territory. Some villagers, as in Narsaq, are organizing themselves to prevent the establishment of huge mines. 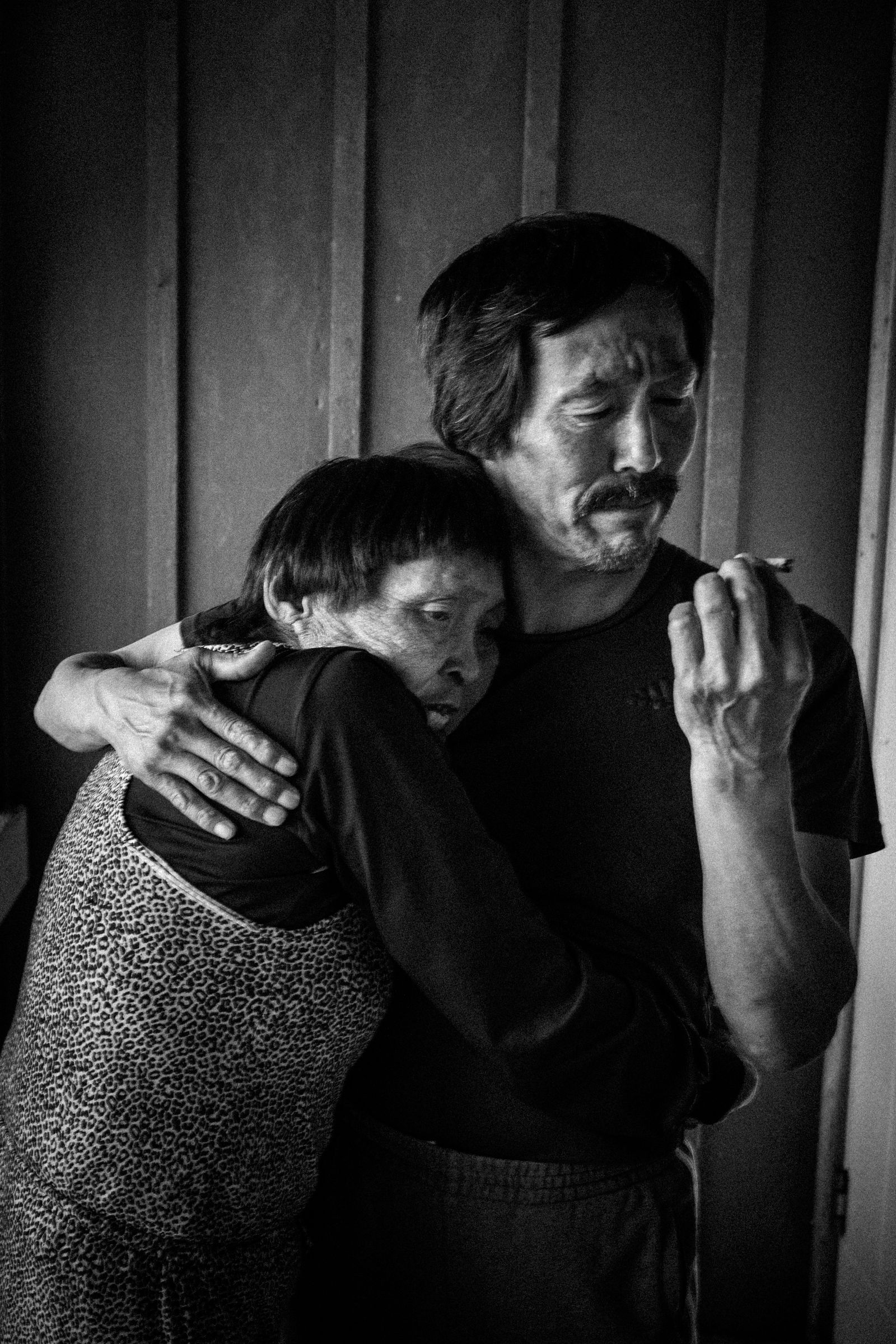 During several months of travels on the west coast of the largest island in the world, we met a great diversity of people who make up the Greenlandic society of today and tomorrow. Fishermen, carpenters, workers, businessmen, ministers, mayors, high ranking civil servants, young people out of school, psychologists, hunters, activists, shepherds, artists, retired people in isolated villages… On this immense land where humans are so rare, each encounter is an event, each exchange is memorable. 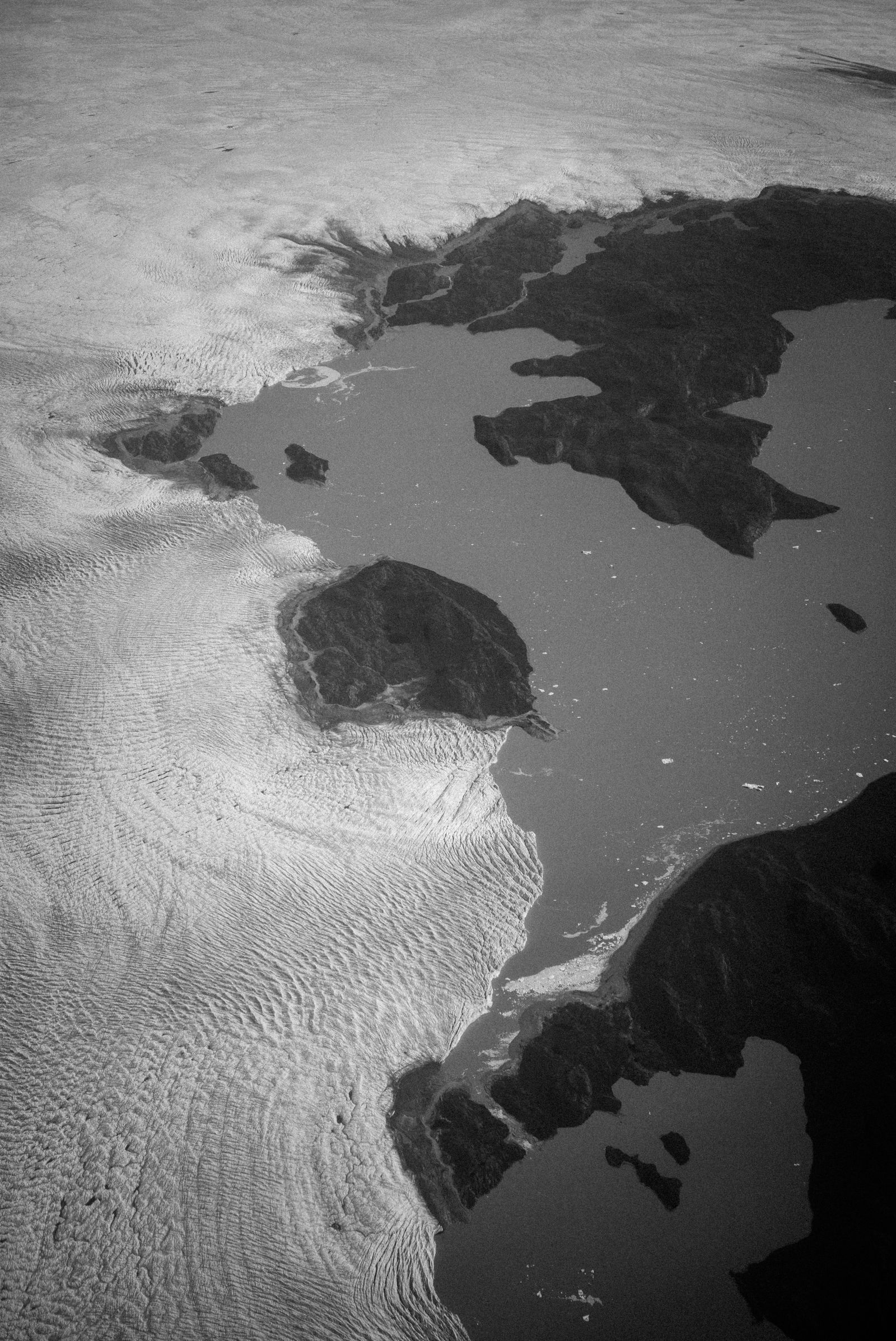 From the numerous testimonies collected and from our experience on the spot, we composed two books: a photographic narrative and a novel of anticipation. This joint work, between father and son, is the fruit of several years of exchanges, transmission and adventures. It follows our first book, Mongols (Les Belles Lettres, 2013), on the evolution of Mongolian society in the face of the mining boom. Olivier Laban-Mattei wanted to photograph Greenlanders who are also undergoing the restructuring of their society. 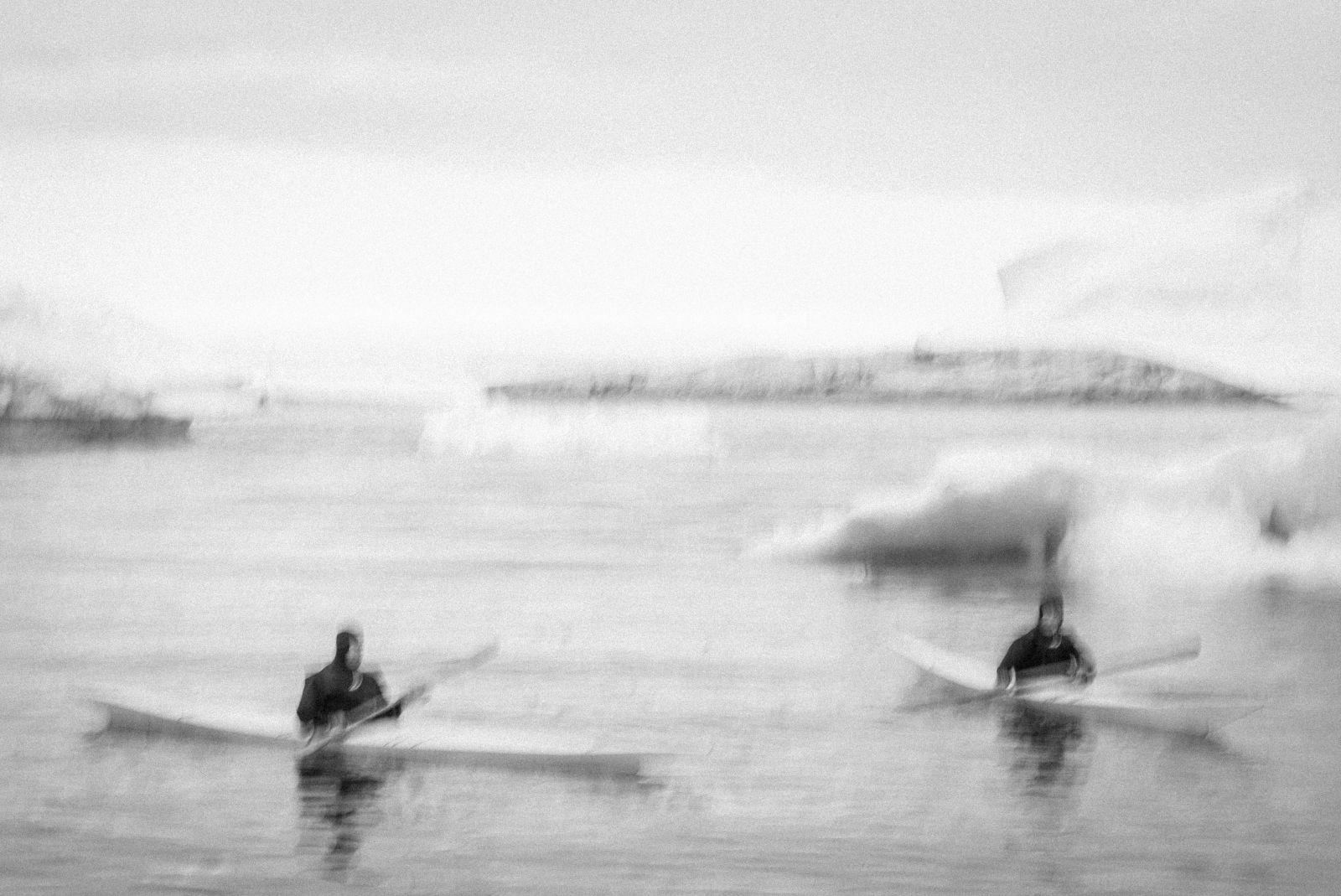 His work also tries to give a glimpse of the weight of the ambient psychological malaise, by echoing ancestral Inuit myths that continue to form the local imagination.
Lisandru Laban-Giuliani, for his part, has listened to the stories and aspirations of the Inuit, to compose a novel imagining the future of this island, inspired by the work of Augo Lynge. 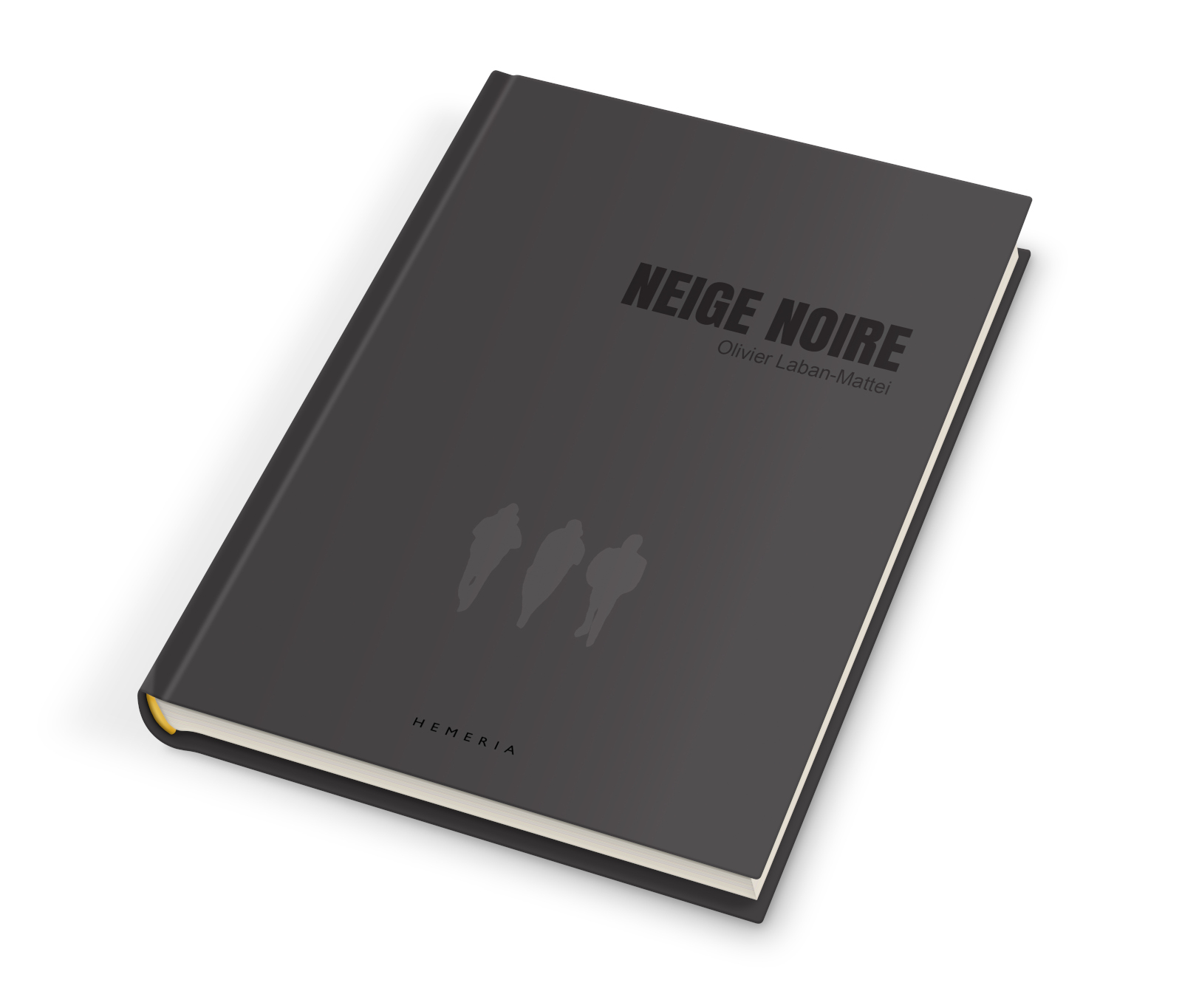 Immortalizing the lives of ordinary people is also a way of disturbing the easy image of a virgin land promised to mining wealth, to reveal the complexities of an aching society. Behind the infallible smiles, the darkness of silent evils is revealed. Beyond the breathtaking landscapes, the fragility of a tormented world. 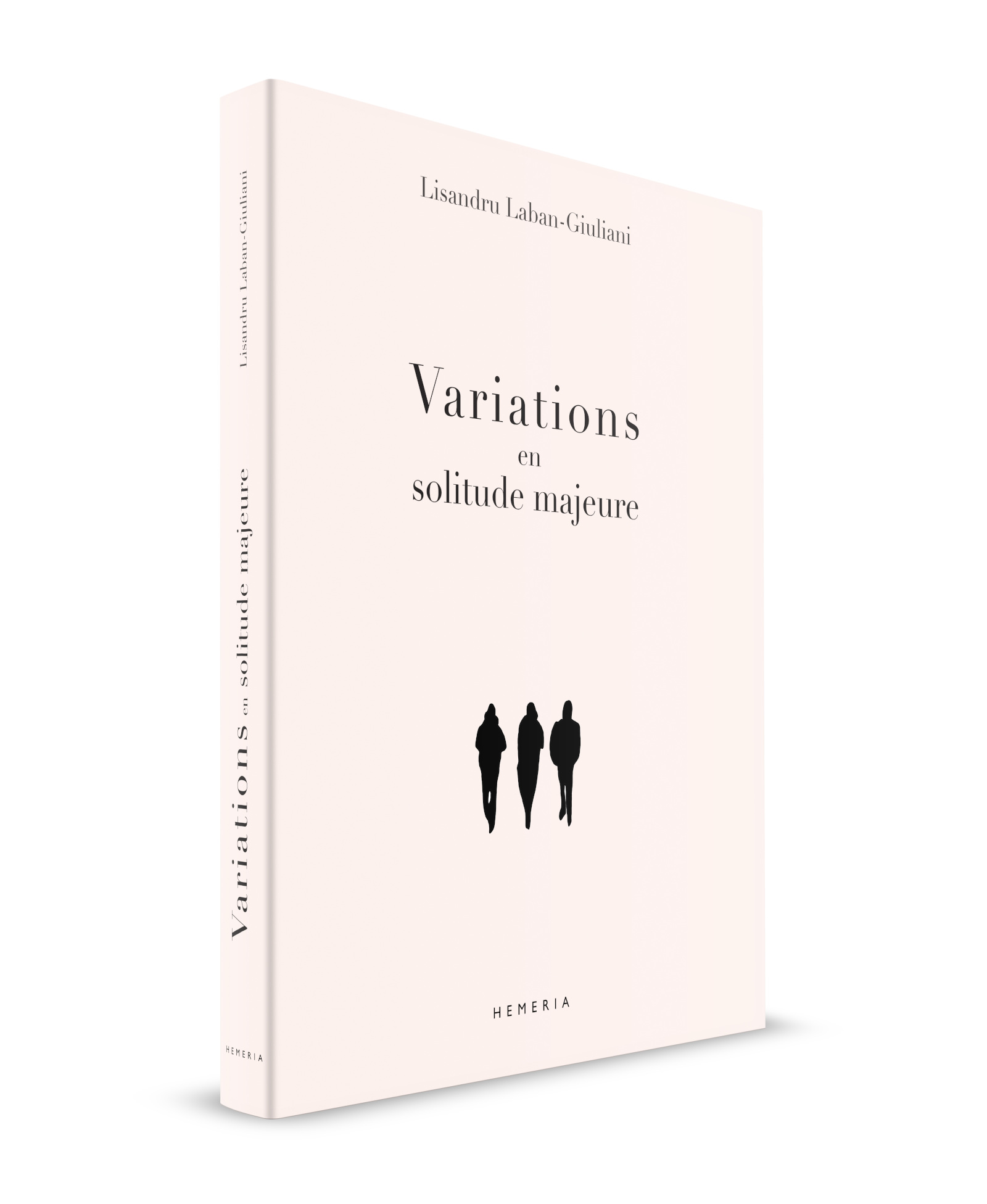 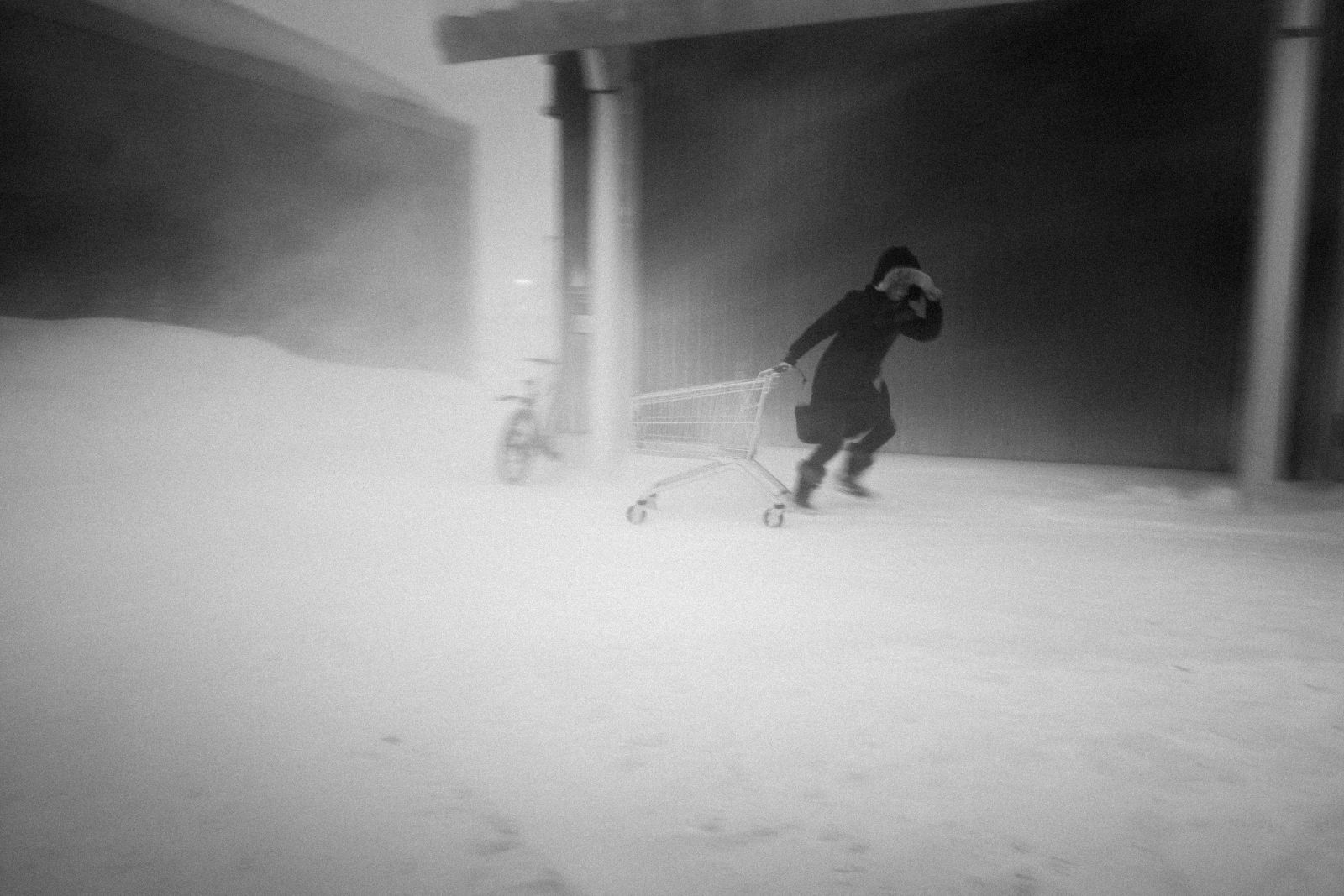 In Greenland, the snow sometimes turns black because of atmospheric pollution. Like an indicator of the state of the planet. It is said that glaciers carry the memory of the world within them. In the same way, the Greenlanders, on the front line of climate change, which is disrupting their relationship with the world, are the sentinels of our common future.

Release date : we expect to publish the book in April 2023. 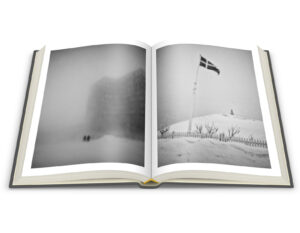 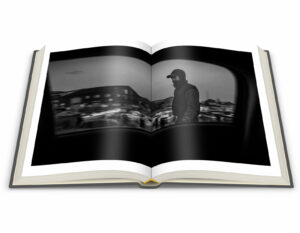 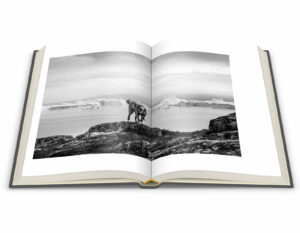 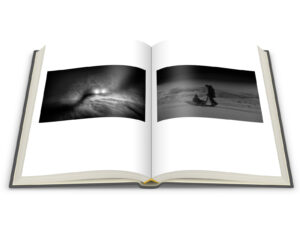 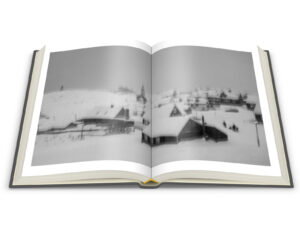 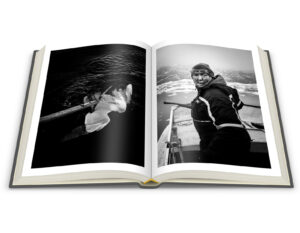 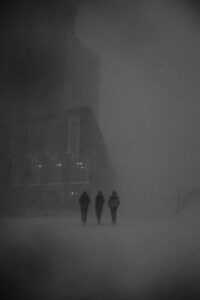 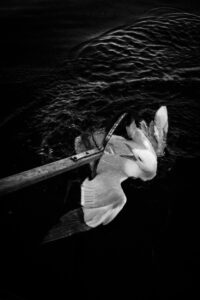 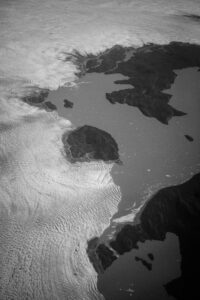 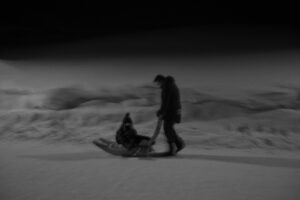 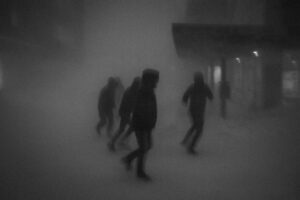 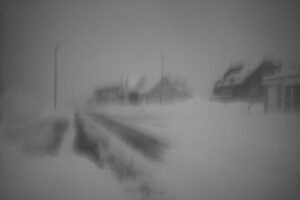 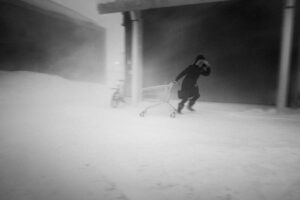 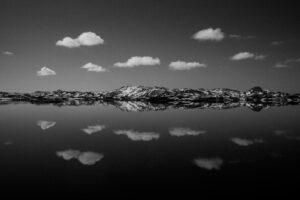 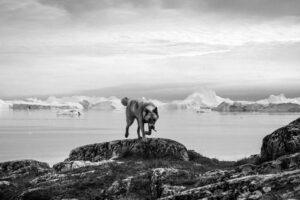 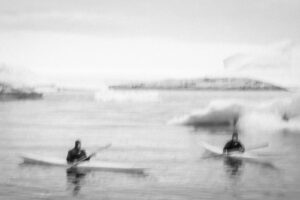 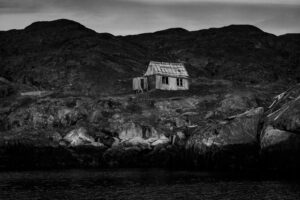 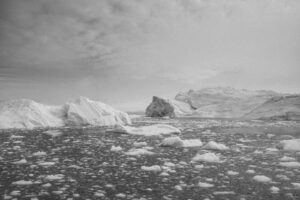 Olivier Laban-Mattei has been a photojournalist since 1999. After ten years spent at Agence France-Presse covering national and international news (wars in Iraq, Georgia, Gaza, insurrection in Iran, earthquakes in Java and Haiti, cyclone in Burma…), he has been working since 2010 on long-term projects, devoting most of his current reflection to the question of the destructuring of societies, whether due to war, global warming or the greed of foreign investors for the riches of their lands. New forms of colonialism are also at the heart of his concerns. Since 2013, he has been a member of the MYOP agency. Between 2013 and 2016, he works with the UNHCR on war trauma among refugee populations (Jordan, Central African Republic, Cameroon, Chad) and Solidarités International (South Sudan) while he continues since 2010 his regular collaborations with the French and foreign press (Arab Spring, wars in Libya and Yemen…). Between 2016 and 2019 he directed a documentary film, “Apnea”, on the psychological trauma of a rape victim (diff. France 3 national). In the continuity of his investigation in Mongolia on the harmful effects of the mining boom (2012 to 2014), he leads since 2020, with his son Lisandru Laban-Giuliani, a project in Greenland on the contemporary Inuit society, mixing photographs and anticipation story. In 2021, he documents, for the DG ECHO (European Commission), the consequences of the crisis linked to the Covid-19 epidemic in the Rohingya refugee population in Bangladesh. In 2022, as the winner of a grant awarded by the Ministry of Culture and the National Library of France as part of a major national commission on France, he looks at the new peasantry, guarantor of a more just world. His work, internationally recognized, has been awarded many times, including three World Press Photo, two Paris-Match awards, two POY, two Days Japan. He is also regularly exhibited and screened, in particular at the photojournalism festival Visa pour l’Image. For years, Olivier Laban-Mattei has been passing on his knowledge of the profession during training courses in photojournalism and visual storytelling, while raising students’ awareness of the meaning of images and their use. He published a book in 2013, “Mongols” (ed. Les Belles Lettres).

Lisandru Laban-Giuliani is a master’s student in political science at the École de la Recherche à Sciences Po Paris (Comparative Politics major) and a lecturer in method at the same school. He is co-author of the book Mongols (ed. Les Belles Lettres, 2013). Since 2016, he has been involved in several associations helping exiles and the most destitute, as well as for the protection of the environment. His passion for writing, nourished by meetings with various writers including Patrick Chamoiseau or Mathias Enard, is developing in parallel to his training in humanities and social sciences. In 2020, he was awarded the special mention of the Books critic’s prize. He also won the Max Lazard prize for his writing project on the future of Greenland and the Marcel Bleustein-Blanchet Foundation’s Vocation Prize for completing his study projects.

You will receive the novel Variations en solitude majeure at a special price of 16 € (public price of 19 €).
Free delivery for metropolitan France.

You will receive two copies of the novel Variations en solitude majeure at a special price of 32 € (public price of 38 €).
Free delivery for metropolitan France.

You will receive three copies of the novel Variations en solitude majeure at a special price of 48€ (public price of 57€).
Free delivery for metropolitan France.

You will receive the Neige Noire photo book at a special price of 49 € (public price of 59 €).
Free delivery for metropolitan France. 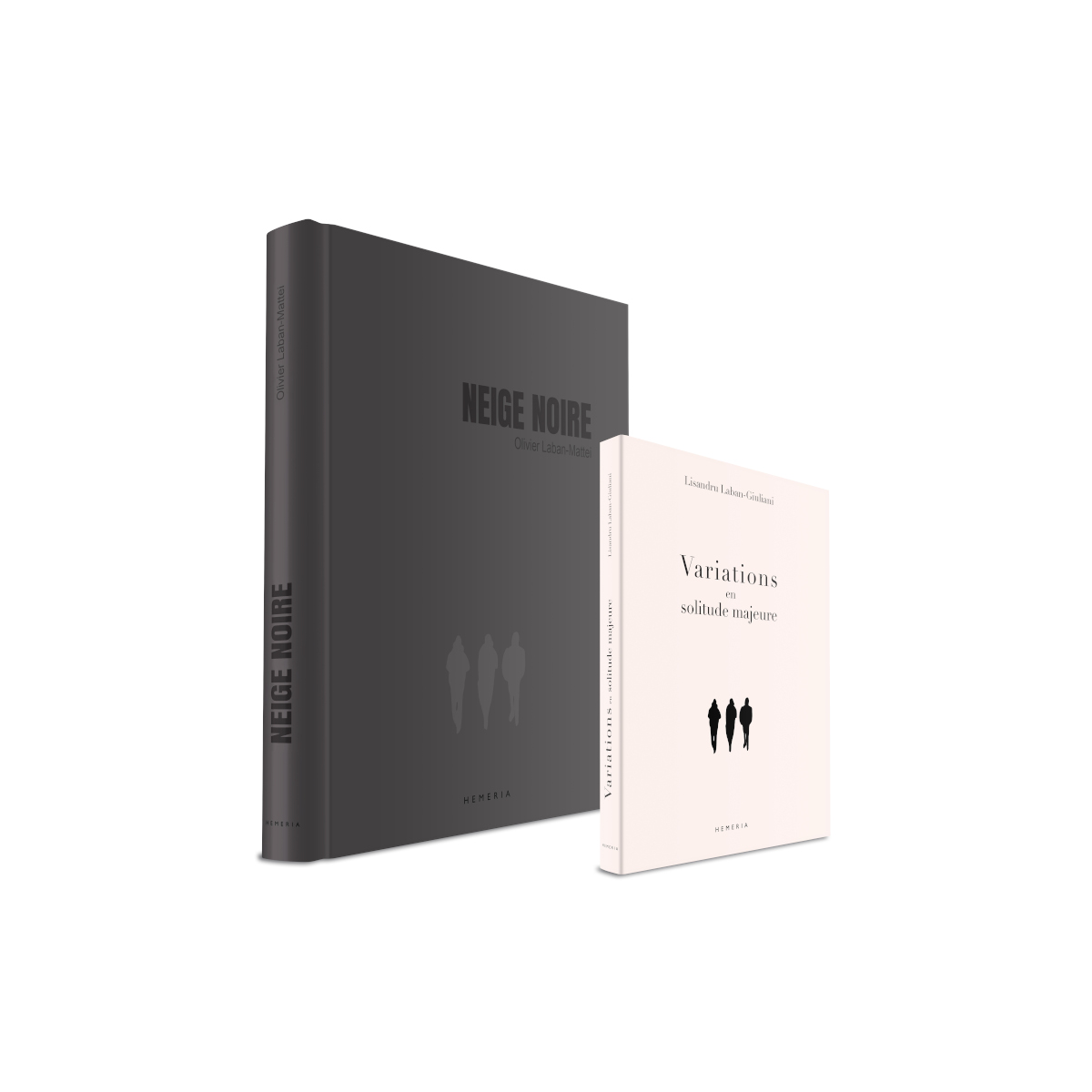 You will receive two copies of the Neige Noire photo book at a special price of 98 € (public price of 118 €).
Free delivery for metropolitan France.

You will receive three Neige Noire photo book at a special price of 147 € (public price of 177 €).
Free delivery for metropolitan France.

Be the first to review “Neige Noire” Cancel reply