I don’t live in Iceland, Iceland is living inside me. For more than ten years, I have criss-crossed it by its tracks and trails. It has become my promised land.

SAGAS is a photographic gateaway into a thousand-year-old Iceland. For this dreamlike journey, black & white prevailed. It is the language of time immemorial, the only one capable of transmitting the raw force of my emotions. In order to pay tribute to the magic of Iceland, SAGAS will be a custom printed book, with the unique know-how of Hemeria.

With their heads below the Arctic Circle, their feet on the magma, the people of the drakkars have forged their identity in a geography of chaos. The strong connection to nature and climate, the persistence of ancient texts and traditions, make the Icelanders of today the true descendants of the Vikings of yesterday. To tread the hyperboreal moors, to survey deserts and volcanoes, to let oneself be drawn into the immensity of the sky, to face storms and mists, it is always to become one with indomitable nature. Live Iceland means learning since the dawn of time that the unpredictable is the ordinary of the world. 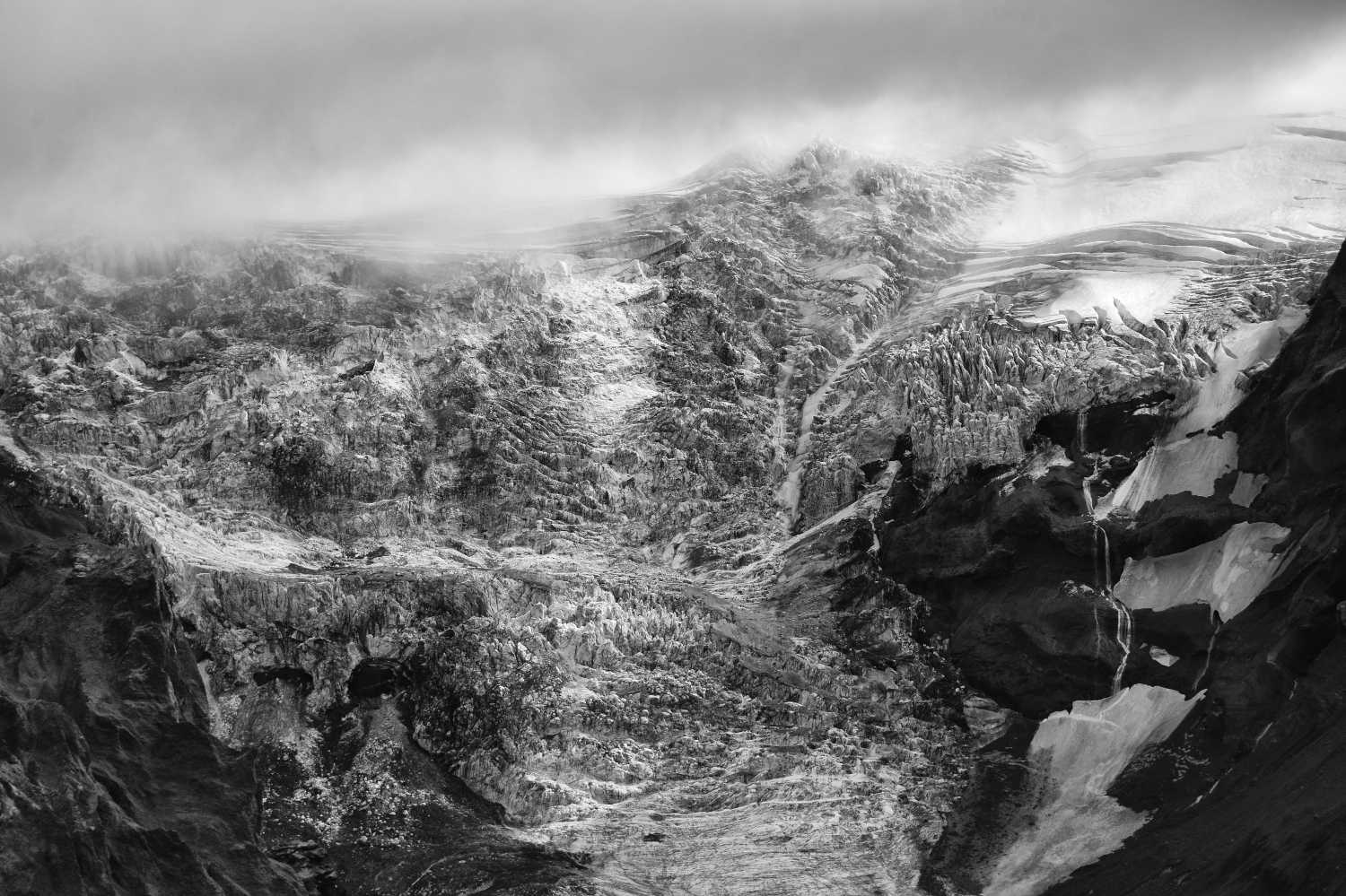 The story of a cold but lasting love.
After traveling a lot as a reporter, from Madagascar to Patagonia, from Spitsbergen to Antarctica, I ended up cultivating a particular taste for the great outdoors in high latitudes. One day, I found my promised land. Since then, I’ve made about twenty trips there, from a few weeks to several months. In 2017, I published the book Four Seasons in Iceland (Favre), a great publishing success, which was subsequently reissued.
During all these years, I have also photographed the island in black and white, like a secret garden. Lately, that’s even the way I’ve looked at it exclusively. Beyond the strangeness of the landscapes and the strength of the characters, I sought to capture in flight the raw emotions experienced on this 99.7% volcanic pebble, where I breathe harder than anywhere else.
This is how the book SAGAS was born, to be published in the fall of 2021.

“Was there nothing in Iceland to see but mountains, waterfalls, rugged expanses of land and that light capable of piercing you and turning you into a poet.” 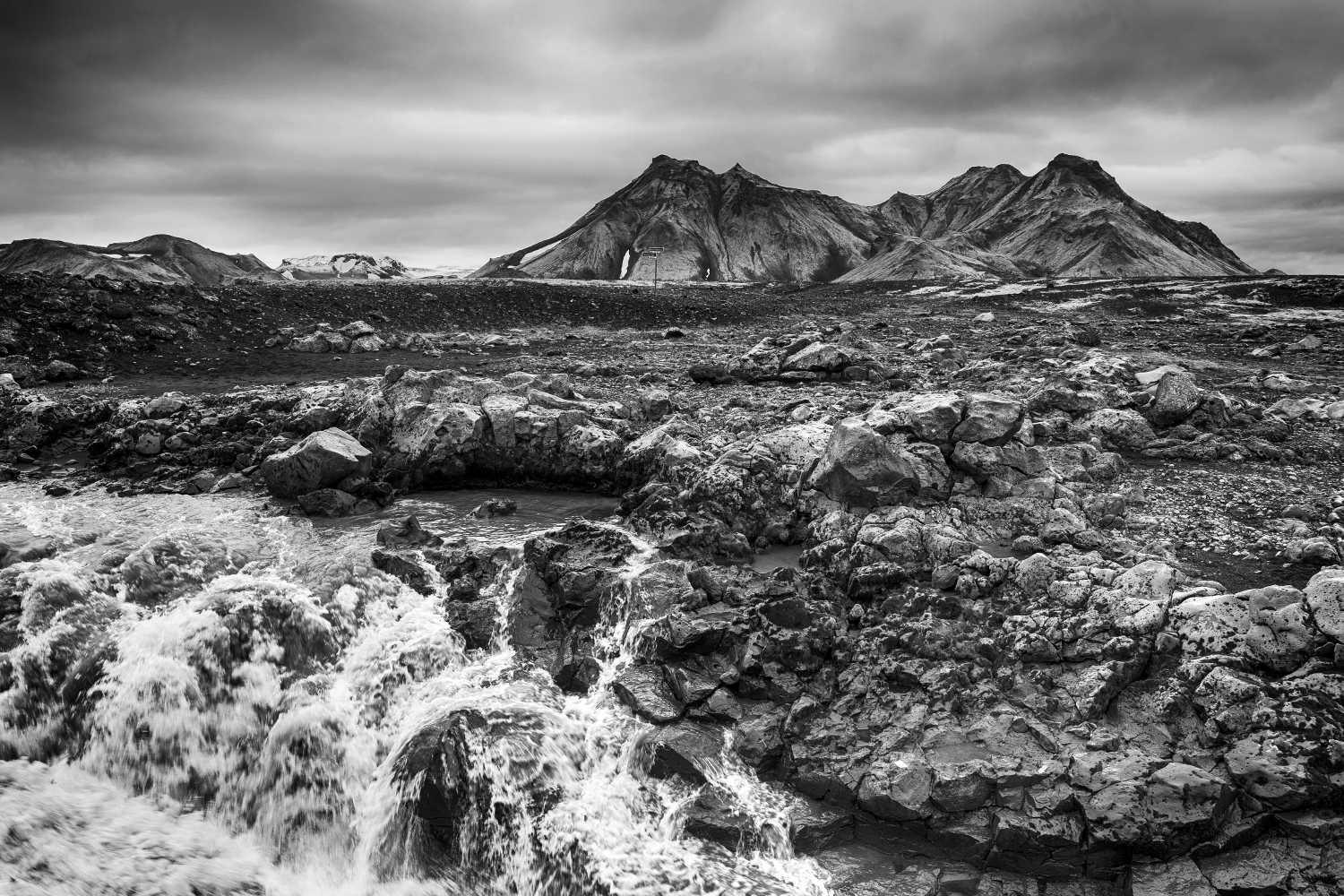 An eternal and contemporary Iceland
With this black and white gaze, I embarked on a journey between imagination and reality, to an Iceland that crosses the ages. The Iceland of dreamlike landscapes, as approached by the Vikings in the 9th century, is as you still see it today, almost untouched. The same Iceland with two hundred volcanoes, with a Dantesque climate, where a people of 360,000 souls have learned to live in contact with fiery nature, knowing that it will always have the last word.
Today’s Iceland still seems to emerge from the sagas of yesterday, those medieval texts in which war and love, end of the world and resurrection mingle. Steeped in Viking mythology, the sagas bathe the souls of the islanders. “Thetta reddast” is their motto, forged by twelve centuries of resilience. She said, “Yes, eventually everything will work out …”
It is this Icelandic soul that I share in this book. 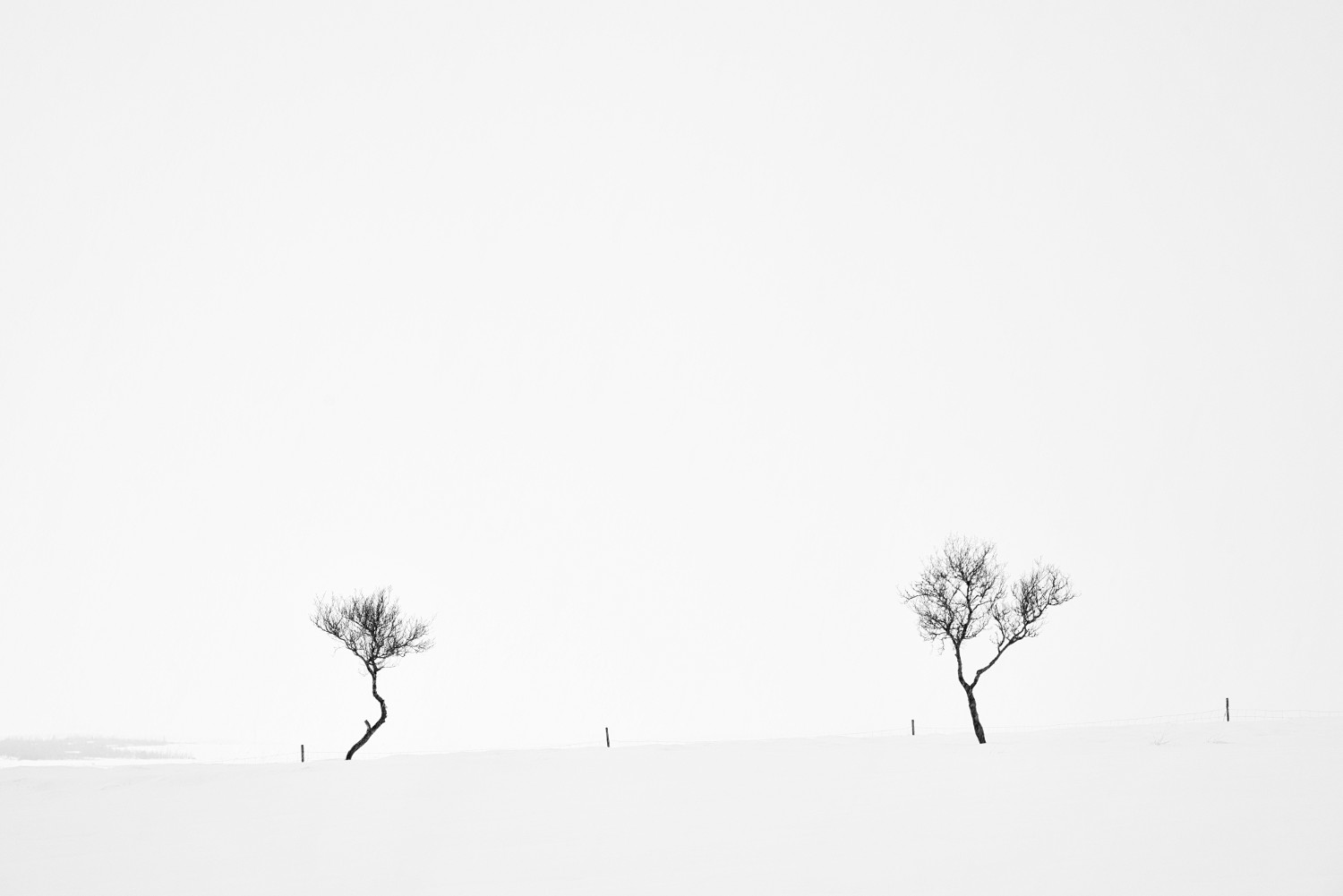 Landscapes and faces
During my travels on these arpents, as austere as they are enchanting, I have met women and men sculpted by the wind and the sea spray. I found on their faces the valleys and lakes, the coldness of the steppes and the warmth of hot springs. People of few words, always upright under storms, their existence has been shaped by the vagaries of the earth, the climate and insularity.
The herders always go to the mountains for a thousand-year-old transhumance. Horses gallop across the tundra, fishermen brave the waves, children make freedom their most beautiful playground. The wooden churches stand as they did on the first day. Traditions survive through the centuries. I went to meet this eternal Iceland, like a miracle torn from time. 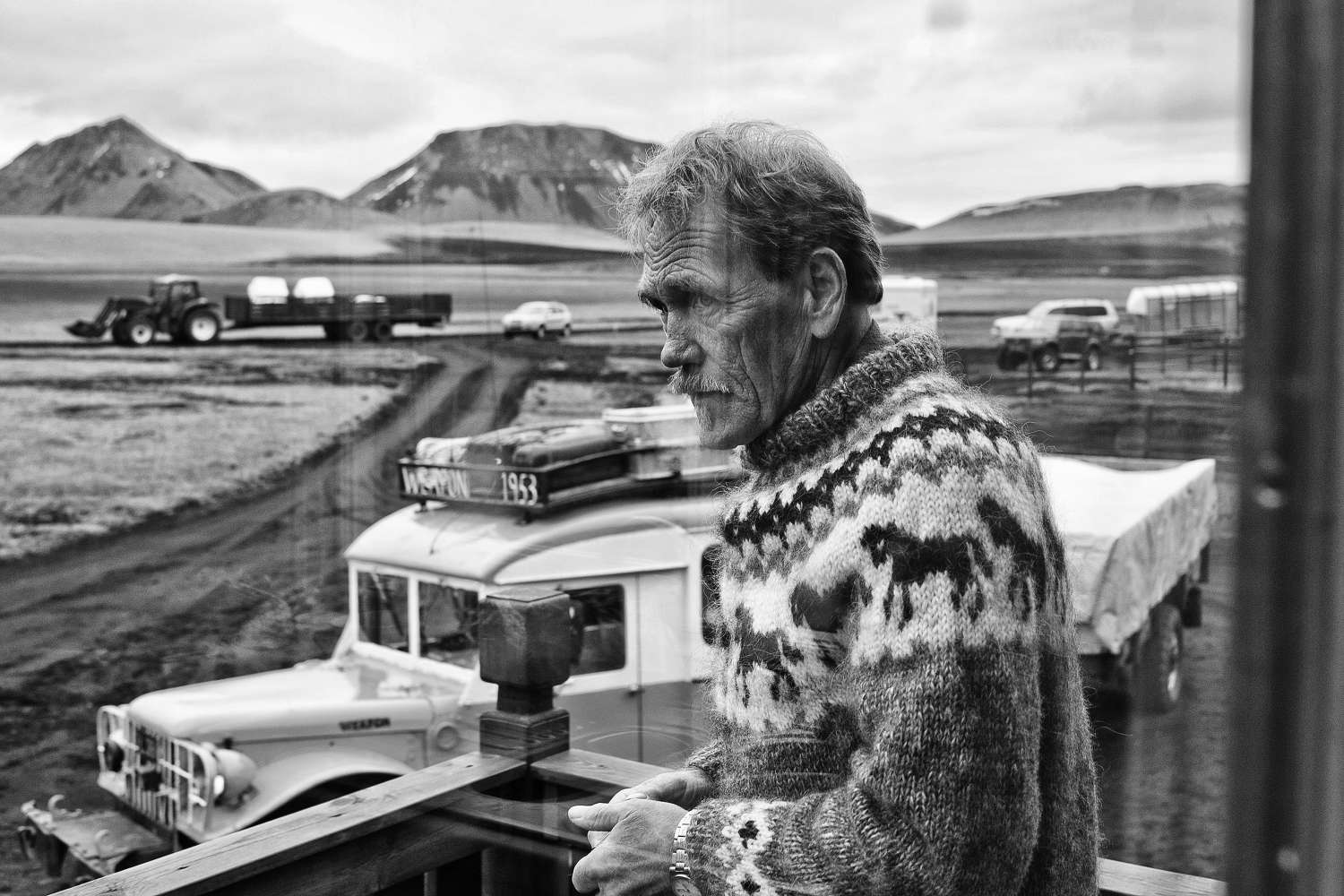 Crossing paths
My photos show deserts, volcanoes and glaciers, some of the most beautiful waterfalls of a country that counts thousands of them… They explore the highlands of the interior, the majestic Fjords of the West, the glaciers of the South, the black sand beaches, the hills and the lavas. Anyone who is fascinated by Iceland will recognize these iconic landscapes.
With time, I also tried to get away from the tourist places. I took the side roads, against the tide of mass tourism, taking my steps into forgotten regions. I waited for the chiaroscuro, looked for the backlight, took my camera out in the rain and in the blizzard. I tried to capture the moment of a rare light, the print of a mist, the suspended flight of a cloud.
My images suggest the whistling of the wind, the singing of the streams, the crashing of the waterfalls, the silence of the snow, the solitude and the isolation… This book is also an inner journey. 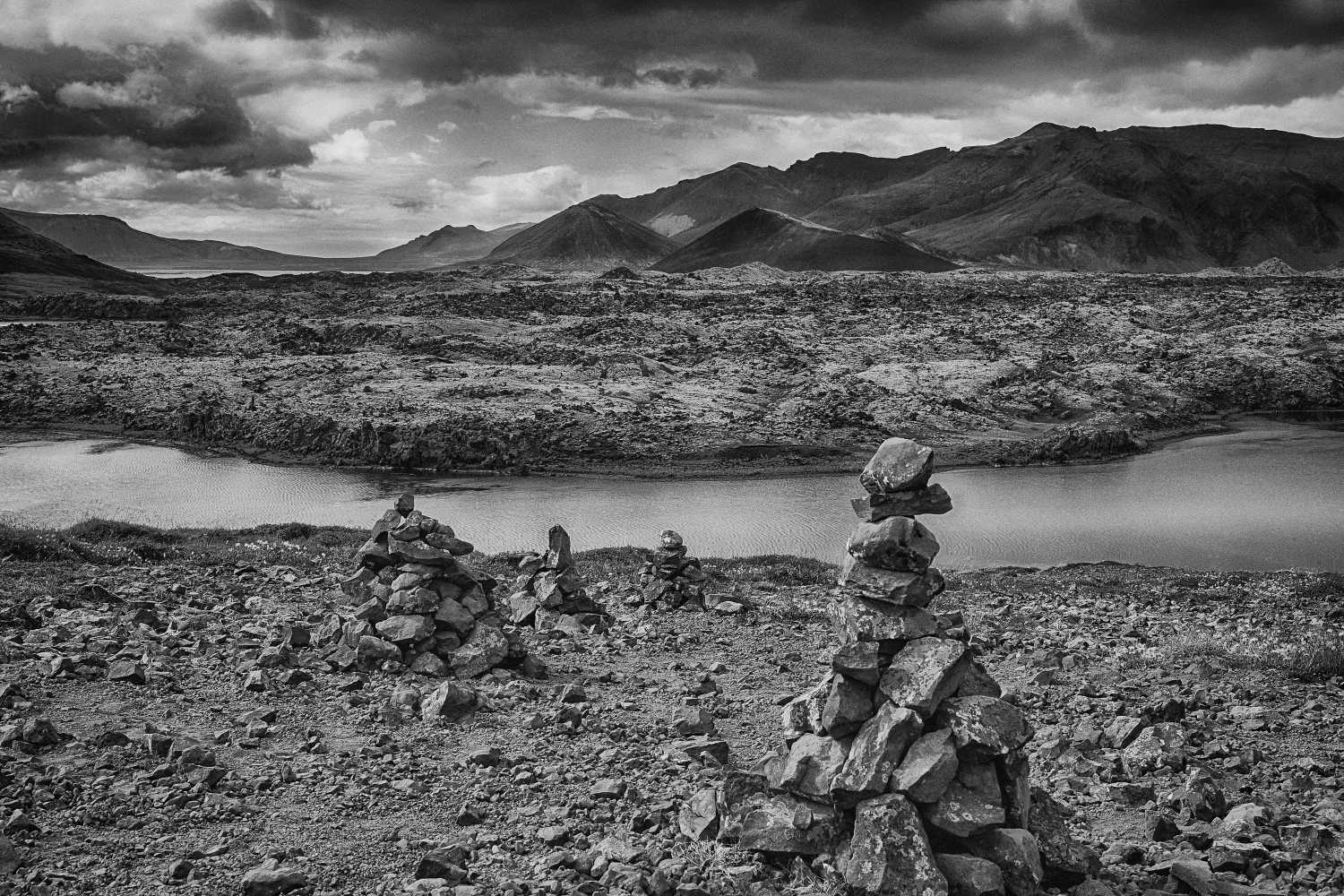 If I appeal to your contribution, it is because this time I have chosen to do without a traditional publisher in order to make SAGAS a unique book-object. For this, I decided to lead the project in partnership with Hemeria. This independent publishing house stands out for the quality of the works it produces (paper, photoengraving, printing, binding), made possible by end-to-end control of the production chain.
The production is entrusted to the company Printmodel®, whose know-how has already been put at the service of photographers such as Raymond Depardon, Jean-Baptiste Huynh, Gérard Rondeau, Vincent Munier, Laurent Ballesta … But also with major luxury brands (Hermès, Dior, Chanel) and major museums.

A layout that invites contemplation
The artistic direction has been entrusted to David Alazraki, graphic designer, painter and frequent traveler himself. The choice was made from a clean model, with short, historical and geographical texts, some marked with runes, the letters of the old Norse alphabet.
We wanted the cover of the book to be raw and metallic, evoking the basaltic harshness of this volcanic island and the echoes of history.

A book … and an exhibition

To accompany the release of the book, an exhibition will be organized in the center of Paris. It will then have vocation to cross France. This exhibition will be an opportunity, for those who wish, to come and pick up the pre-ordered book, to talk about their experience of Iceland or to come and get a little advice to prepare for their next trip (yes, soon!).

Environmental responsibility and sustainability
Hemeria uses only noble materials and in particular paper from sustainably managed forests and produced in accordance with FSC and PEFC standards, in order to limit its environmental footprint. Hemeria also participates in the reforestACTION program: one tree planted for each book sold online. 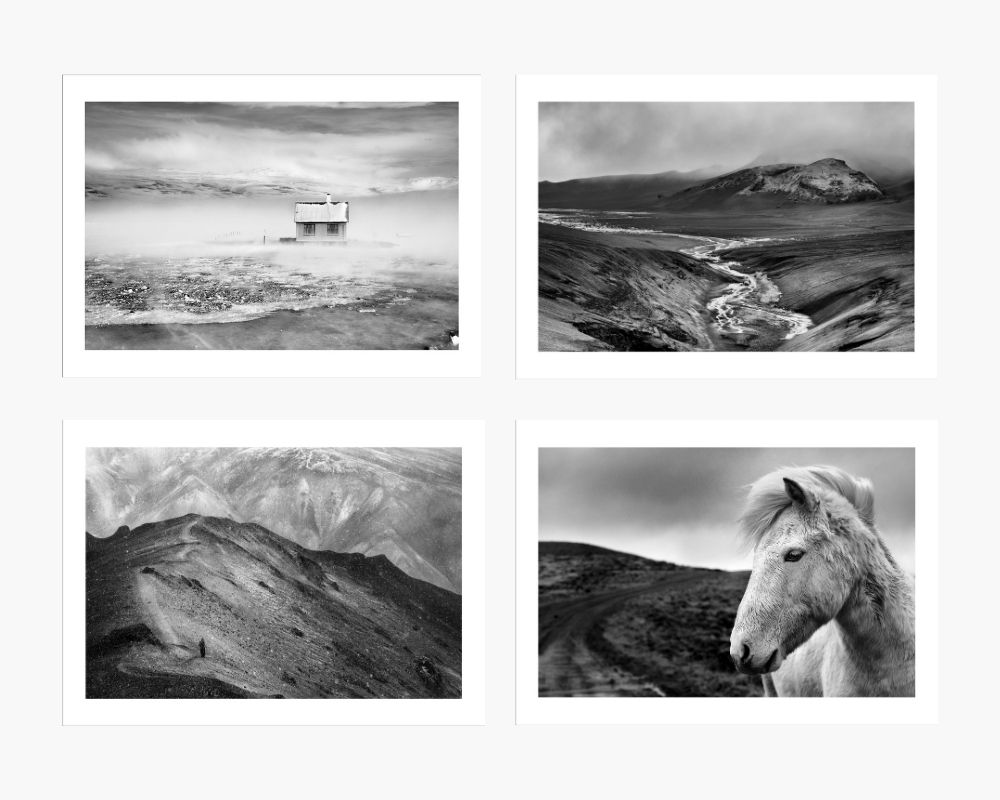 Postal Cards available as a reward.

Totbag available as a reward.

Images available to choose for the 220€ reward 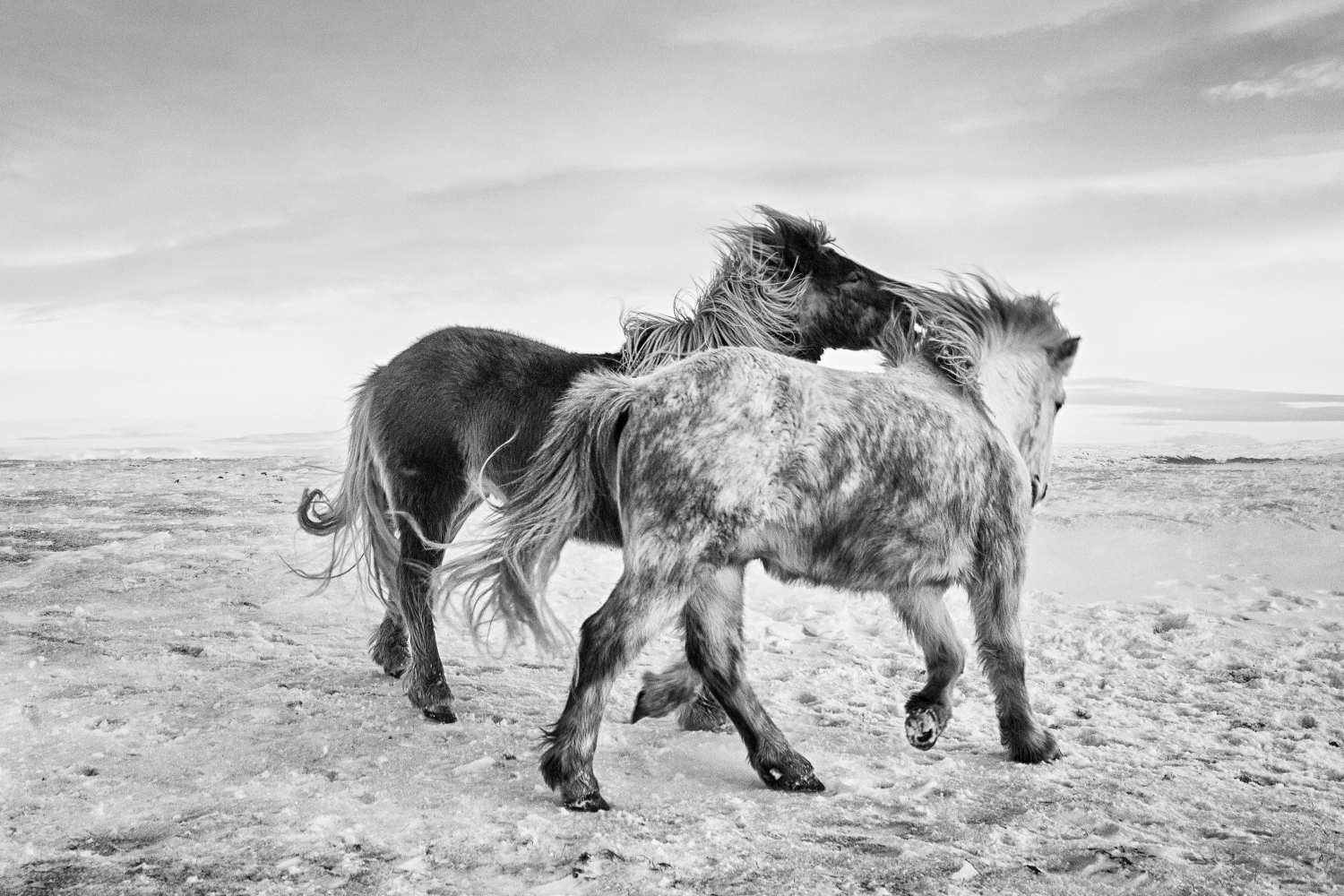 Image A. Avaible as a Inkjet print on Hahnemülhe Baryta 300g paper. 220€ Reward. 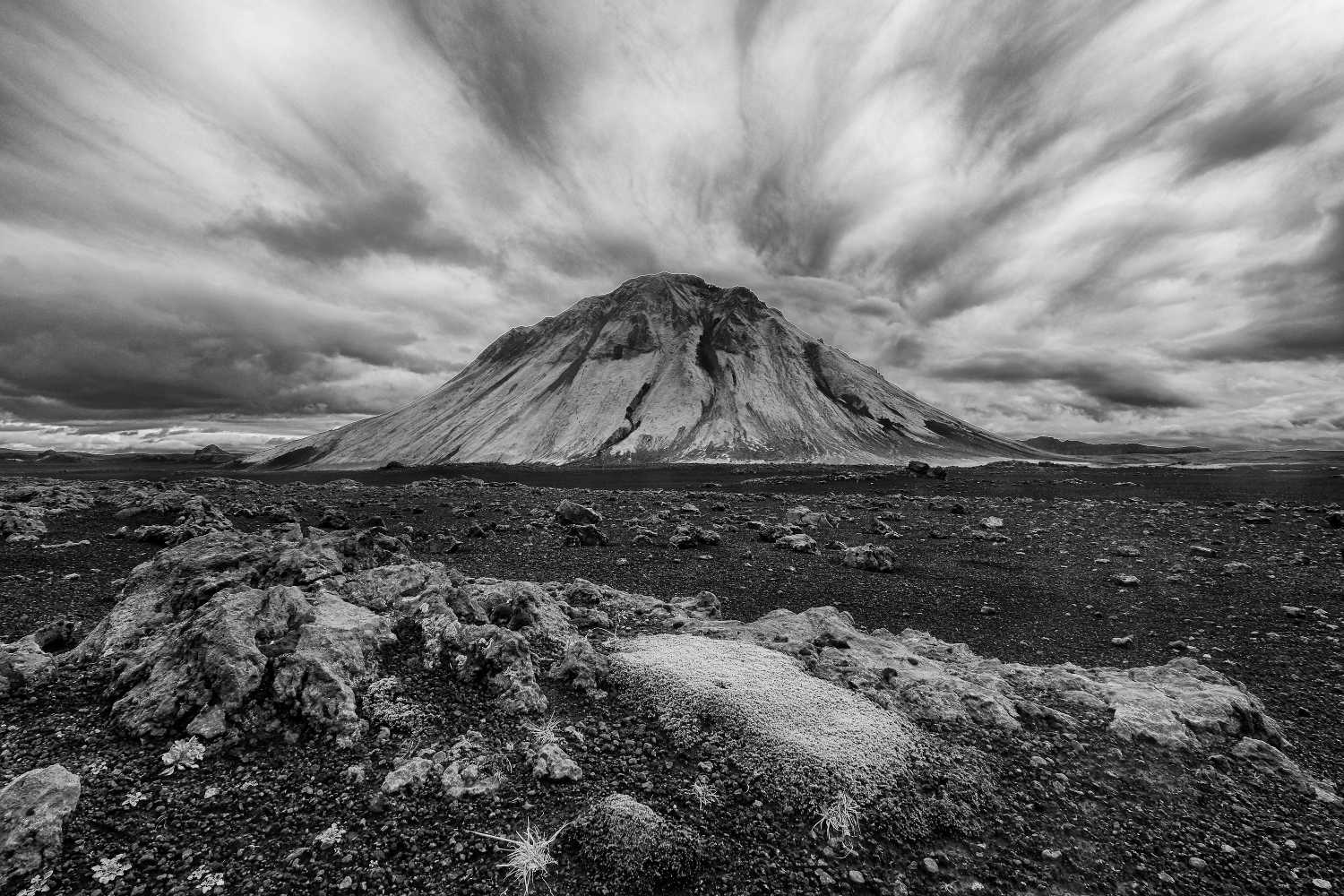 Image B. Avaible as an Inkjet print on Hahnemülhe Baryta 300g paper. 220€ Reward. 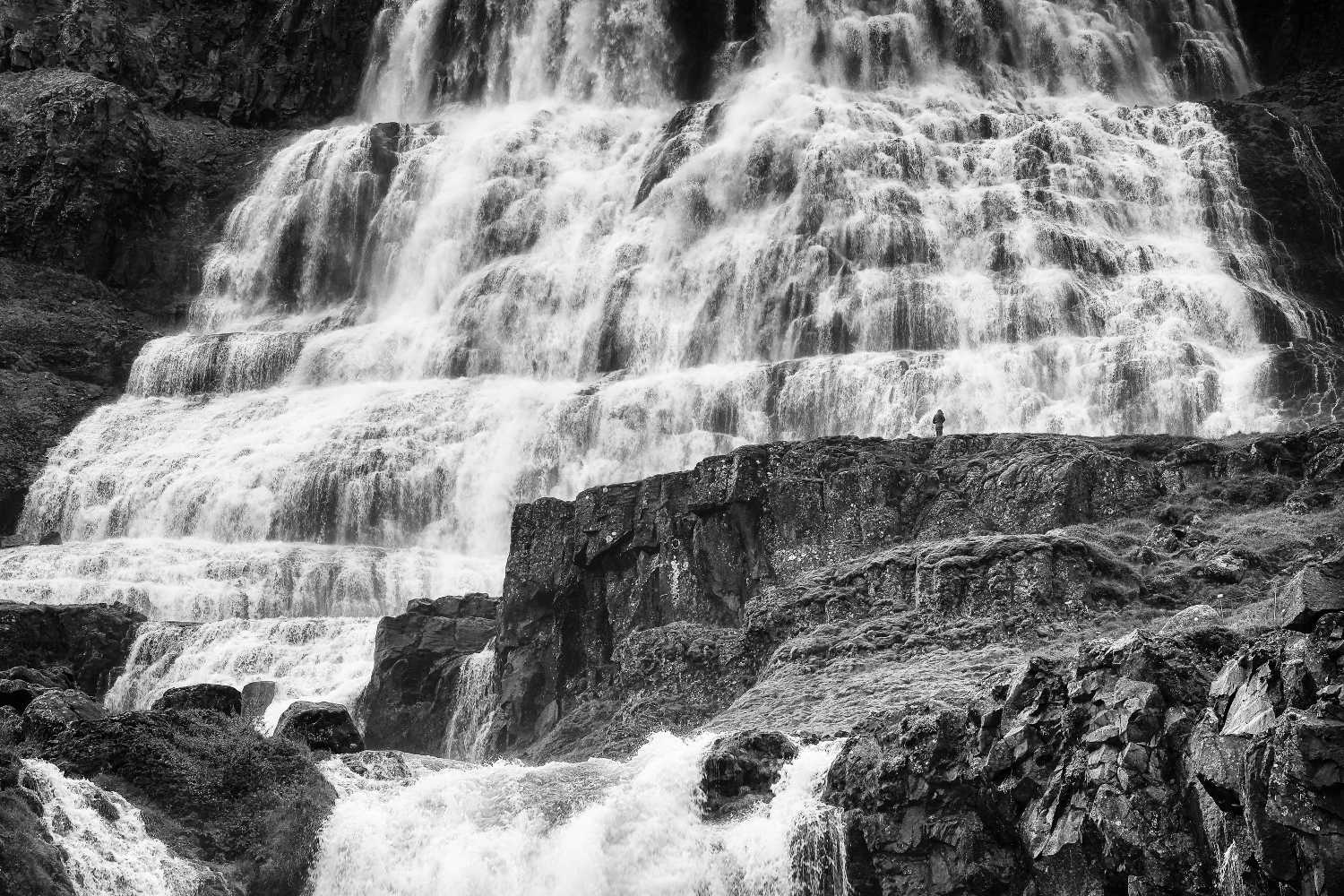 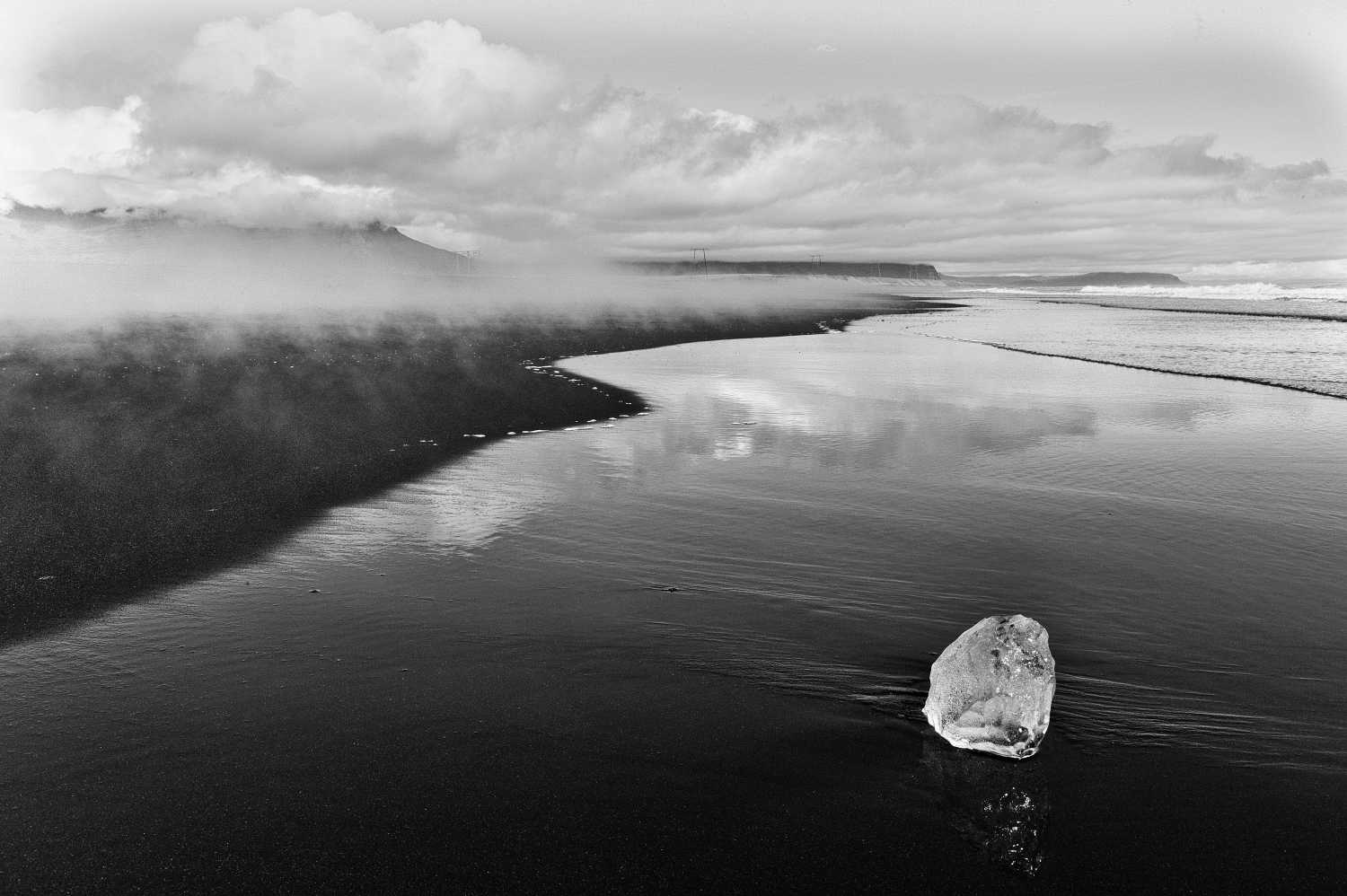 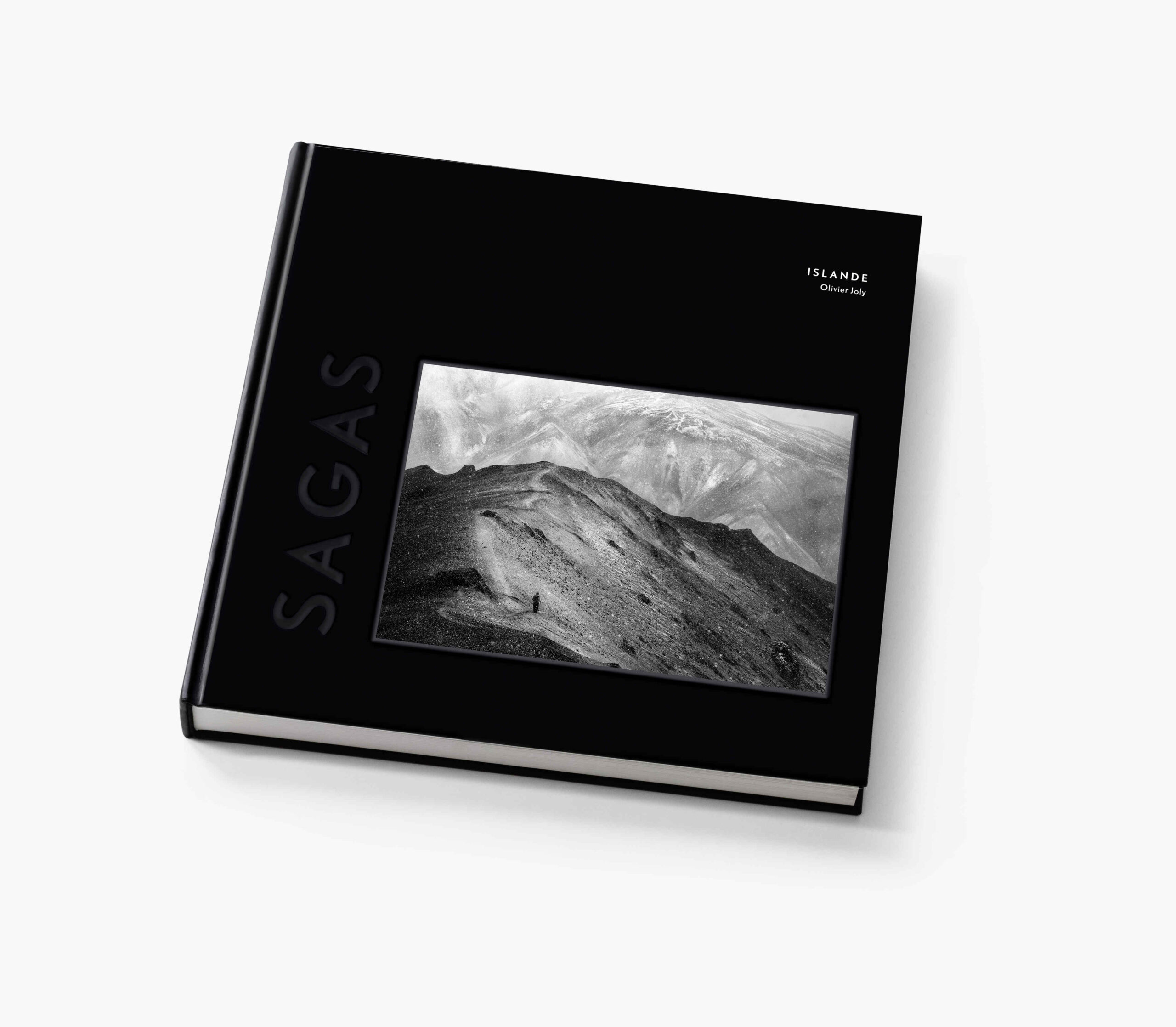 The SAGAS book
+ one print (unsigned, unnumbered) of a photograph (30x45 cm) to be chosen among the 4 images proposed (Image A, B, C or D at the bottom of the page). Inkjet print on Hahnemülhe Baryta 300g paper
+ Your name in the book.

The autographed SAGAS book
A numbered and signed print (format 30x45 cm) of an image an image that you will choose from the book once received.
Inkjet print on Hahnemülhe Baryta 300g paper
+ Your name in the book.

2 signed SAGAS books
+ 2 Tote Bags
+ a numbered and signed print (40x60 cm) of an image that you will choose from the book once received. Inkjet printing on Hahnemülhe Baryta 300g paper
+ Your name in the book.

The SAGAS book signed.
A numbered and signed print (50x75 cm) of an image that you will choose from the book once received. Inkjet printing on Hahnemülhe Baryta 300g paper
+ Your name in the book.

The signed SAGAS book
+ 1 SAGAS Tote Bag
+ A numbered and signed print (80x100 cm) of an image that you will choose from the book once received. Inkjet printing on Hahnemülhe Baryta 300g paper
+ Your name in the book

3 signed SAGAS books
+ 3 totebags
+ 1 numbered and signed print (80x100 cm) of an image that you will choose from the book once received. Inkjet printing on Hahnemülhe Baryta 300g paper
+ Your name in the book
+ An invitation to the opening of the SAGAS exhibition in Paris in autumn 2021 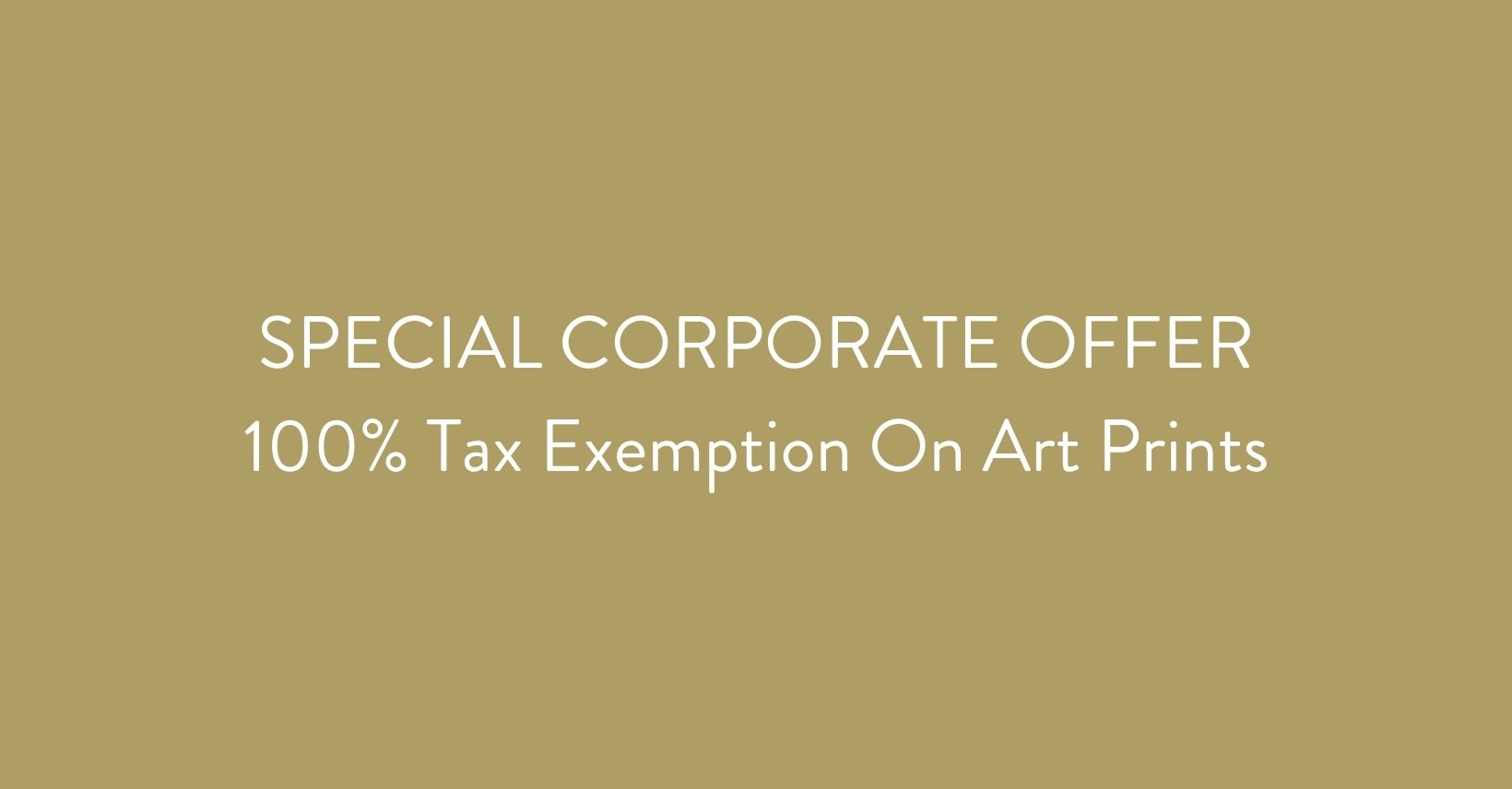 A one-week discovery trip to Iceland, with Olivier Joly as guide
Date to be confirmed depending on the evolution of the health crisis (this consideration includes airfare, car rental and accommodation; it does not include meals and other incidentals)
+ A copy of the SAGAS limited edition box, signed by Olivier Joly
+ Your name in the book