CORAL is a tribute to coral as an essential ecosystem for our survival. It tells the story of the rebirth of an Indonesian fishing village. Having become actors in the restoration of the coral reefs that surround them, these fishermen are today the guardians of their resources. By staging strong, often spectacular images, this first book by Martin Colognoli, whose approach oscillates between documentary and artistic, is a hymn to the defense of biodiversity.

This crowdfunding is now over,  you can now order the book on Hemeria main website here.

What is the CORAL book?

The photographic book CORAlL is an immersion in the fragile world of coral and the communities that depend on it. It shows solidarity, respect and the link to life. A world that is both raw, real and dreamlike. This book is therefore somewhere between art and documentary.

Through the use of strong, often spectacular images, Martin Colognoli, a French photographer, calls for the preservation of these emblematic ecosystems through a reportage that retraces six years of field experience.
A true hymn to the defence of biodiversity and a tribute to the coral as an ecosystem essential to our survival. 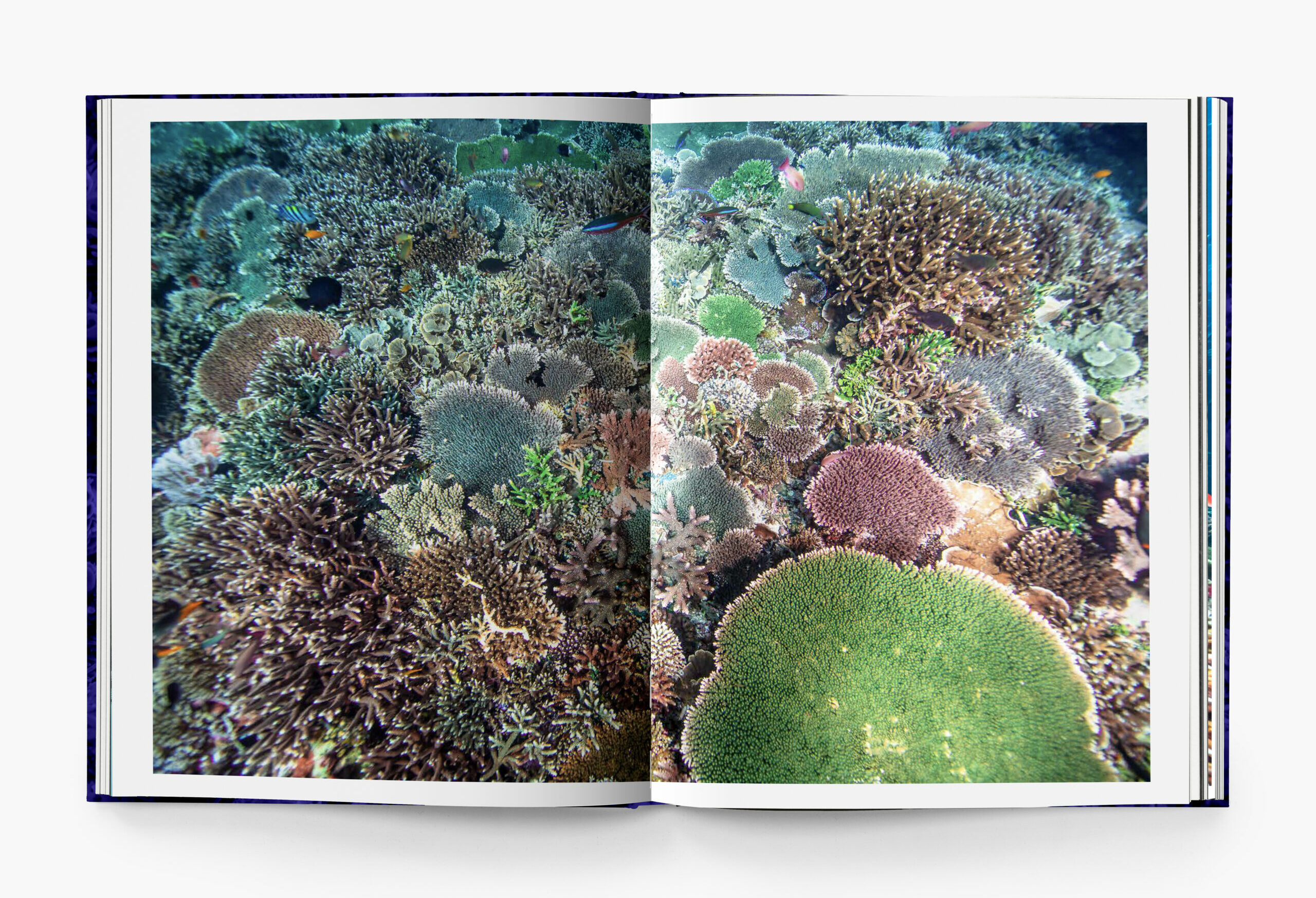 CORAL aims to make a powerful story of people and corals accessible to the greatest number of people through artistic photography.
Its ambition is to become a tool for raising awareness of the fragility of life through a moment of wonder and optimism, a potential beginning of a future change.

It is also a contribution to the protection of coral reefs. Indeed, the profits from pre-sales will be used to support the coral reef protection programme on Hatamin Island, Indonesia, overseen by the Coral Guardian Association.

This book is the material and aesthetic result of six years of work and investment in the protection and conservation of coral reefs in Indonesia. Six years during which Martin Colognoli and his team at Coral Guardian have shared the know-how and the daily life of fishermen and inhabitants of Hatamin Island.

From this experience was born this beautiful book, a collection of underwater shots of these corals that sometimes brush the surface and whose extent we can only guess. A world that is hardly accessible to us and an unusual adventure in the heart of this essential ecosystem.

What are the themes addressed?

CORAL is a book organised in 4 chapters:
– Coral, this animal with a mineral and vegetable aspect and how fascinating it is so ancient and fragile. Whether it is a question of areas preserved from human action or damaged or destroyed areas, they all bear witness to a reality which calls for action.
– The human element, through the inhabitants of the fishing village of Seraya besar. The moments photographed on the spot have made it possible to translate the naturalness of a world and a lifestyle through moments filled with passion, friendship and joy…
It is an authentic tribute to the inhabitants of a village with whom bonds have been forged over time.
– The link between coral and humans, the dependence of humans on coral reefs and in which fishing plays an indispensable role.
– The protection actions carried out in the village to preserve the coral reefs with the support of the French association Coral Guardian.

CORAL is a book that makes the link between an emblematic symbol of a threatened fauna – the coral – and humans. 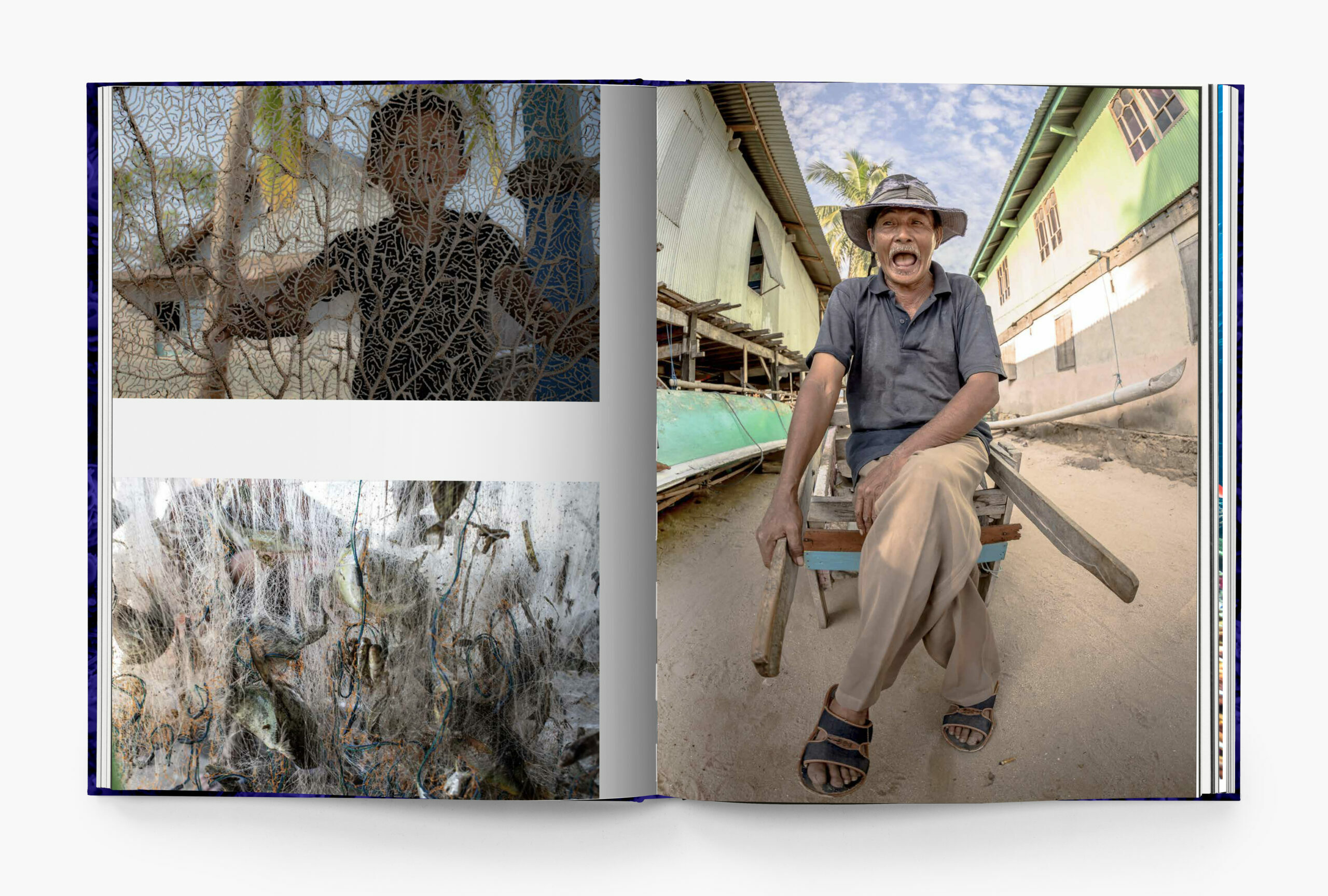 Who is the photographer?

Martin Colognoli is a photographer and a marine biologist who has always been passionate about aquatic environments.
He is mainly interested in the human being and its impact on the living world of which he is a part. His ecological and scientific approach also includes an artistic and militant approach.
For more than 10 years, he has built up a solid professional experience in Indonesia, where he started his career as a marine biologist. The need to protect natural resources became obvious. He therefore co-founded the NGO Coral Guardian with the aim of protecting coral ecosystems through the involvement of the communities that depend on them.
His photographic inspiration is the fruit of his human experiences, his sensitivity and his creativity in a very particular time where humanity unfortunately reaps what it has sown. 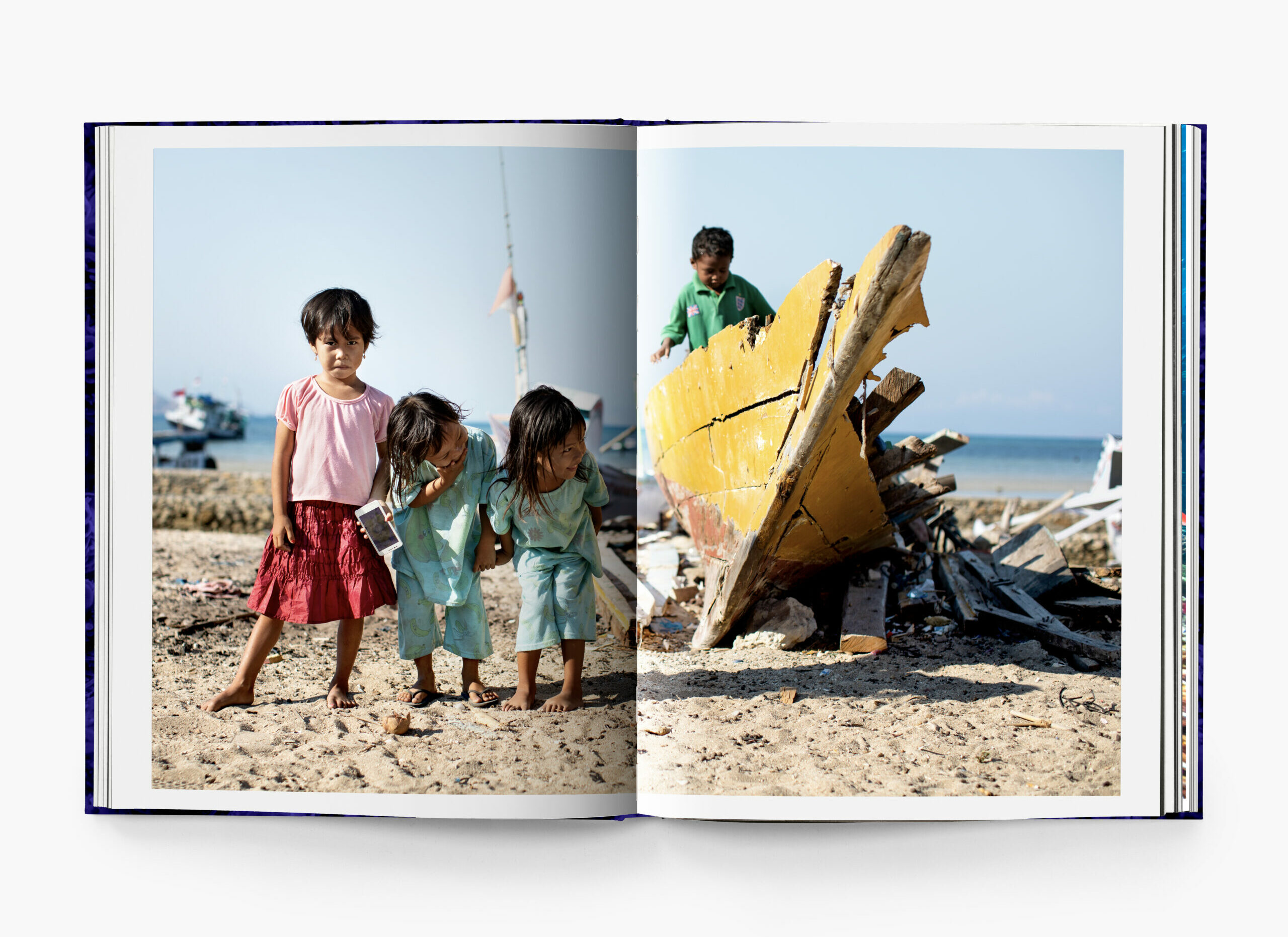 Who are the authors of the preface?

CORAL has the great honour of receiving the words of two prestigious personalities for its preface: Charlie Veron and Denis Allemand.
Charlie Veron or “the godfather of coral”. Born in 1945 in Sydney, Charlie Veron is an Australian biologist specialised in the study of corals and their reefs. He has named and surveyed about 20% of coral reefs and discovered and delineated the ‘Coral Triangle’. Charlie Veron is also an environmental activist.
Denis Allemand is a university professor of animal biology and scientific director of the Monaco Scientific Centre. His main field of research concerns the physiology of marine organisms, mainly corals, and their use as model organisms to understand major biological problems (biomineralisation, symbiosis, ageing, etc.). 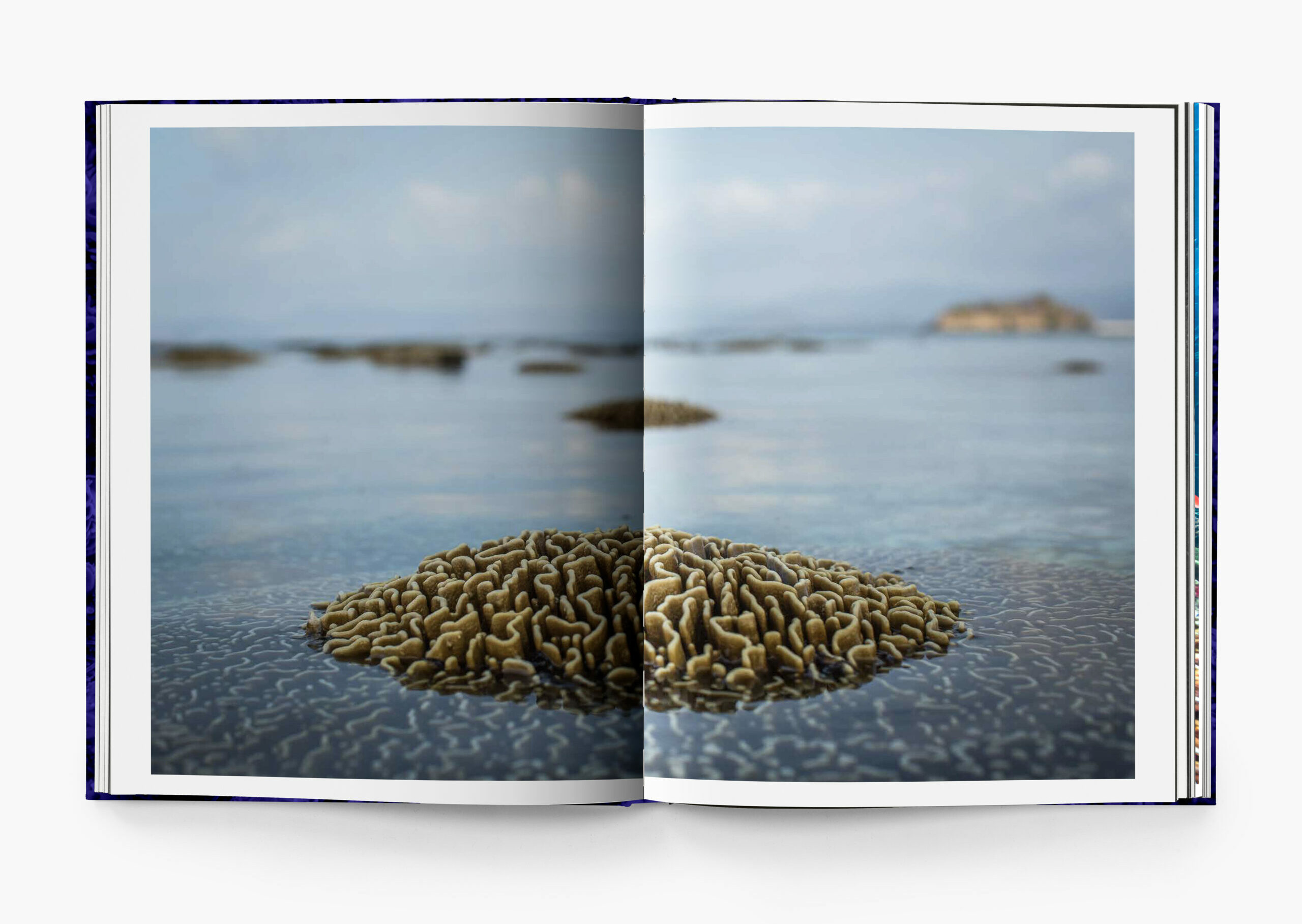 Which team to design it?

Based on the original idea of Martin Colognoli, a team of professionals (art direction, publishing house, writing, printer, etc.) have given priority to the image, firstly, by the choice of a large format (25.5 cm x 34 cm, portrait), a hardback binding, environmentally friendly creative paper, and by the resolutely assertive use of a singular cover, which reveals the artistic scope of this project, printed in silk-screen printing.

Amélie Boutry was able to stage all of his images, revealing with mastery all the links that he wished to transmit, his approach and his commitment, but above all those that are gradually transforming the life of a village, and tomorrow, we hope, many others…

The presentation alternates spectacular photographs of the coral (alive or dead, then back to life), portrait photographs, and more abstract, contemplative black and white photographs. It shows all the dimensions of Martin Colognoli’s photographic work: both a desire to bear witness and a desire to propose a more artistic work that aims to sublimate the coral.

This book was entirely conceived in France and will also be printed there after a year of collective work. It will be sold at a unit price of 49€ in pre-order and 59€ from December 5th! 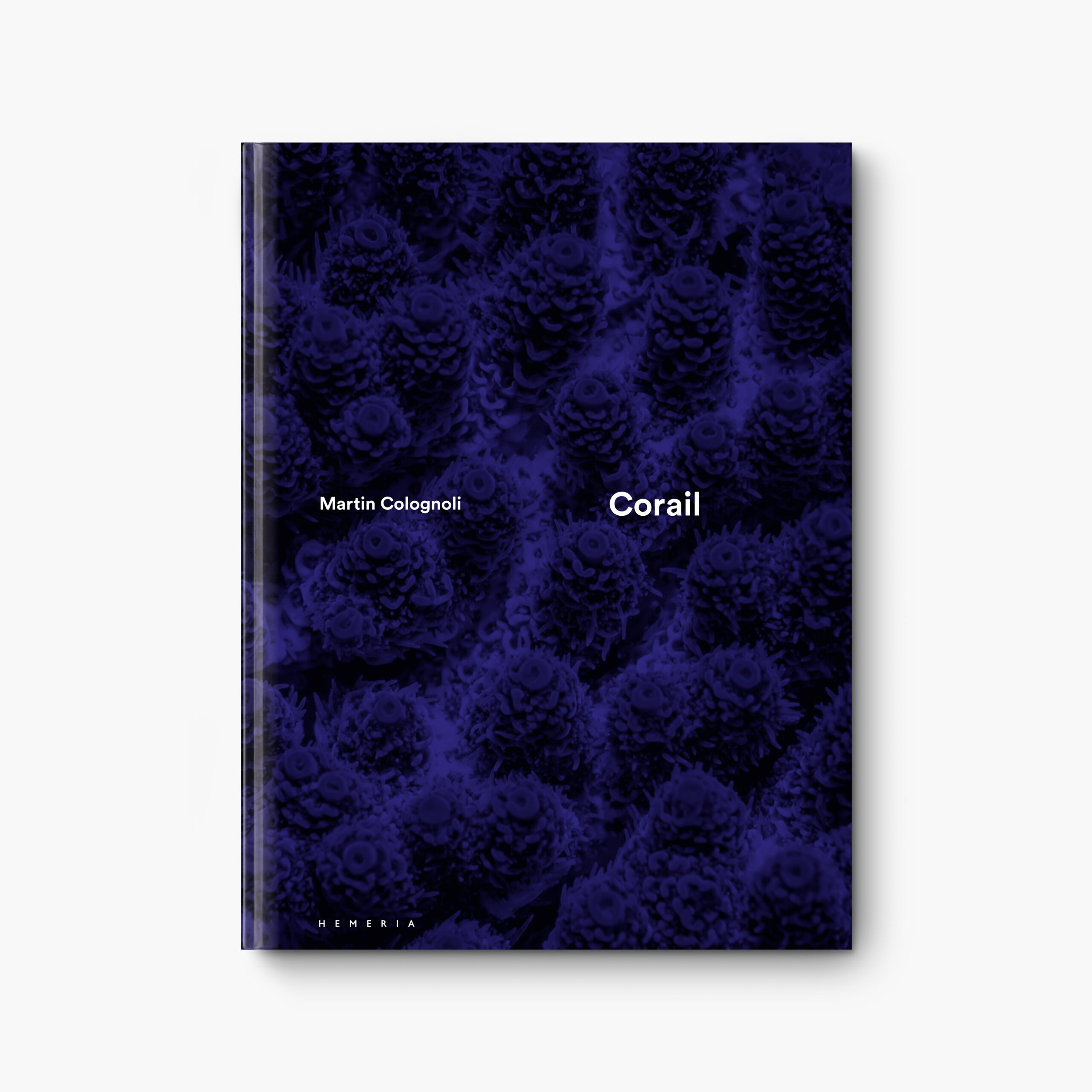 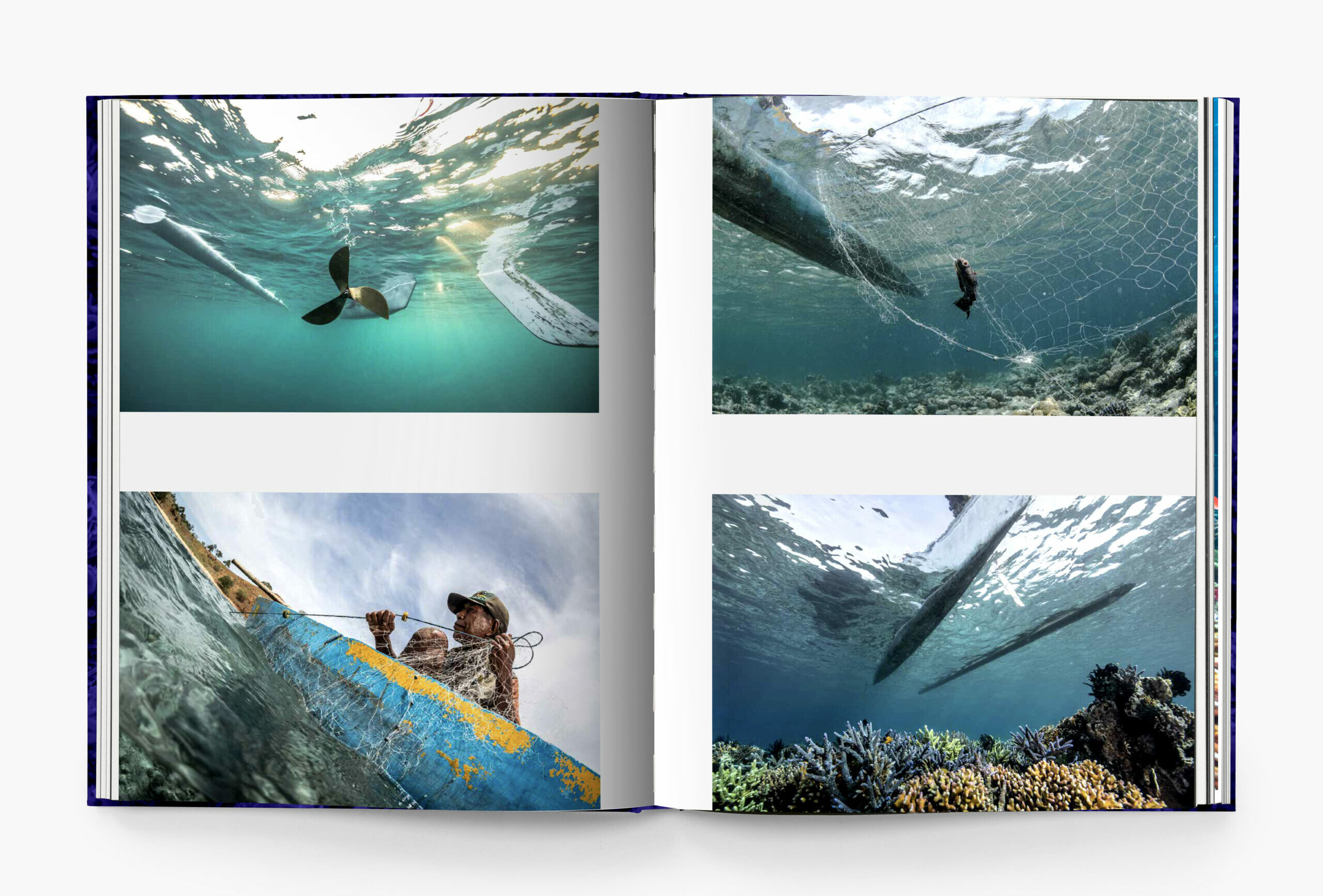 What will the money from pre-orders be used for?

The funds will be used for photoengraving, printing, production and shipping costs.
The cost of printing and layout represents more than half of the budget. Logistics and shipping costs represent 15%.
Preorders profits for the photographer will be entirely donated to Coral Guardian’s field actions in Indonesia and will benefit the village of Seraya Besar as well as the team of coral protectors on the island of Hatamin. 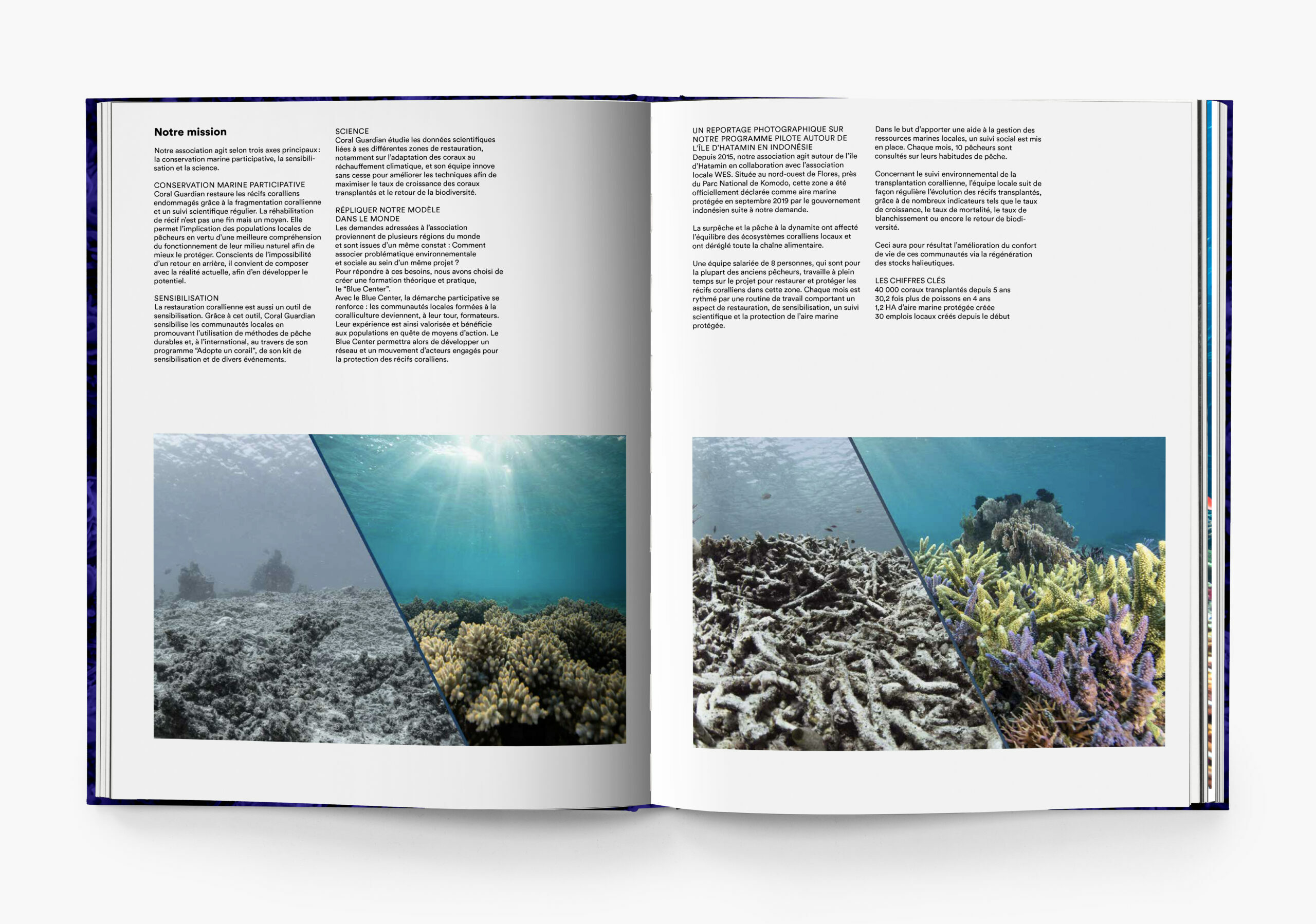 What are the objectives to be reached?

Who will get preorders benefits?

Founded in 2012, Coral Guardian is a French association of international solidarity that works for the conservation of coral ecosystems and the communities that depend on them.

Its mission is to involve local communities through the restoration, protection and enhancement of the coral ecosystem, locally degraded by human pressures. In addition, their valorisation allows the creation of alternative, complementary and sustainable sources of income. 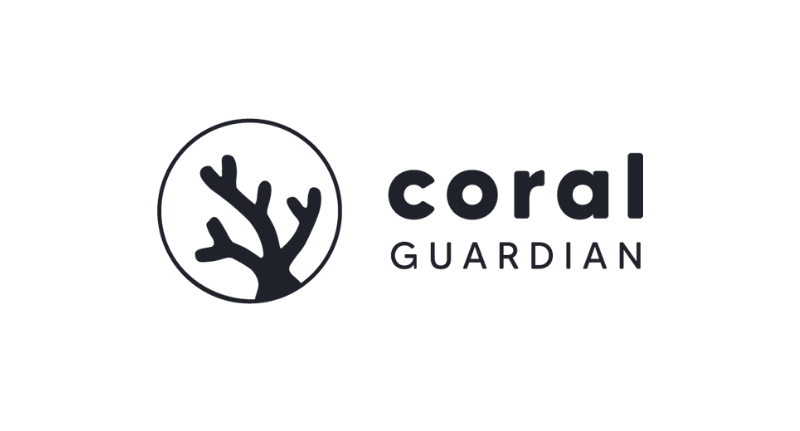 Coral Guardian is an adventure that would never have been possible without the unfailing involvement of the Indonesian and French team. It also benefits from the daily support of people from all over the world.

When will it be shipped to you?

Pre-orders for CORAL will close on 31 October 2021. Printing will follow in November.
The book will therefore be in your mailbox in December 2021, just before Christmas, for sure!

If you have made it this far, congratulations! Thank you very much for giving your time and consideration to this project! The more of you that participate, the more impact this photographic work will have. It is the total amount of participatory funding that will determine the final number of copies printed.
Thank you for your trust in us!
Do not hesitate to send your questions to corail@martincolognoli.com. Martin Colognoli will be happy to answer you!

Many thanks for your support. 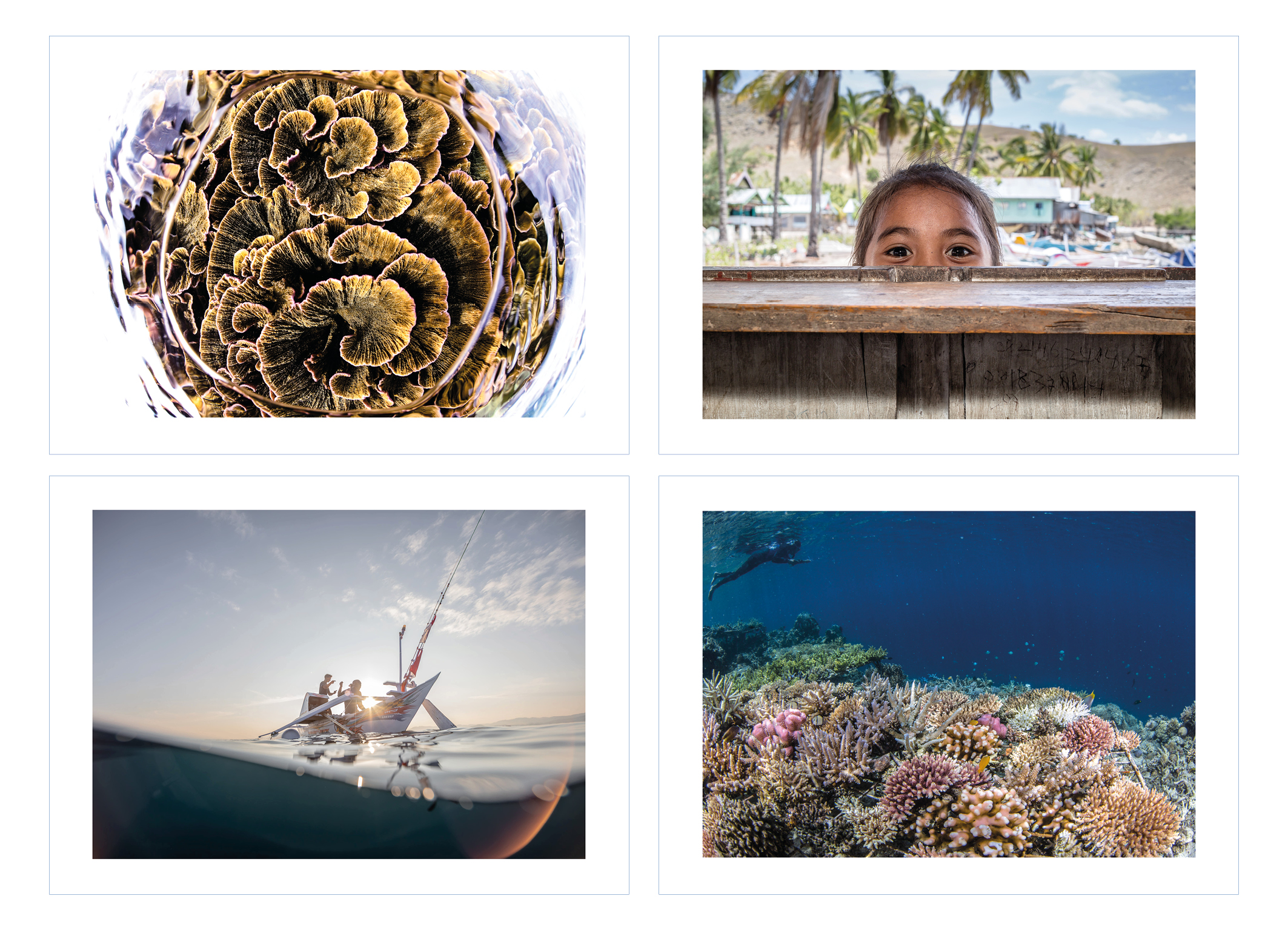 Invitation to the book launch event
Many thanks for your support.

1 book sent to your home
1 postcard 13x18cm
A very big thank you for your support.

1 book sent to your home.
Invitation to the book launch event.
A very big thank you for your support. 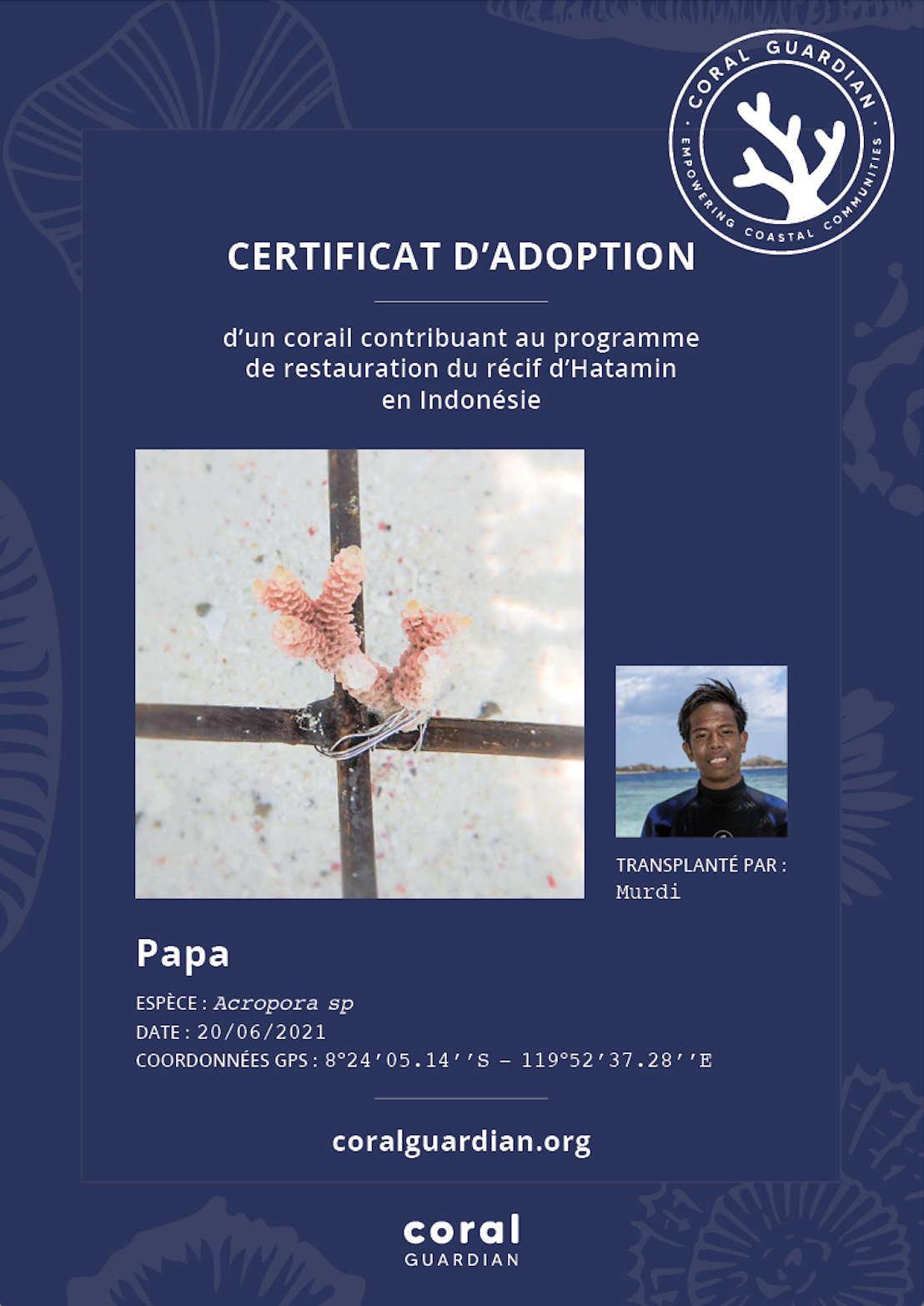 1 book sent to your home
1 certificate of adoption of a transplanted coral to restore the reef on Hatamin Island in Indonesia (certificate sent by e-mail).
1 postcard 13x18cm

1 book sent to your home
1 certificate of adoption of a transplanted coral to restore the reef on Hatamin Island in Indonesia (certificate sent by e-mail).
Invitation to the book launch event
Thank you very much for your support.

2 books sent to your home.
Invitation to the book launch event
Thank you very much for your support.

3 books sent to your home + 3 cards
1 certificate of adoption of a transplanted coral to restore the reef of Hatamin Island in Indonesia (certificate sent by e-mail).
Invitation to the book launch event
Thank you very much for your support.

10 books sent to your home.
1 certificate of adoption of a transplanted coral to restore the reef on Hatamin Island in Indonesia (certificate sent by email).
Invitation to the book launch event
Thank you very much for your support.

20 books sent to your home.
+ 1 certificate of adoption of a transplanted coral to restore the reef on Hatamin Island in Indonesia (certificate sent by email).
+ Invitation to the book launch event 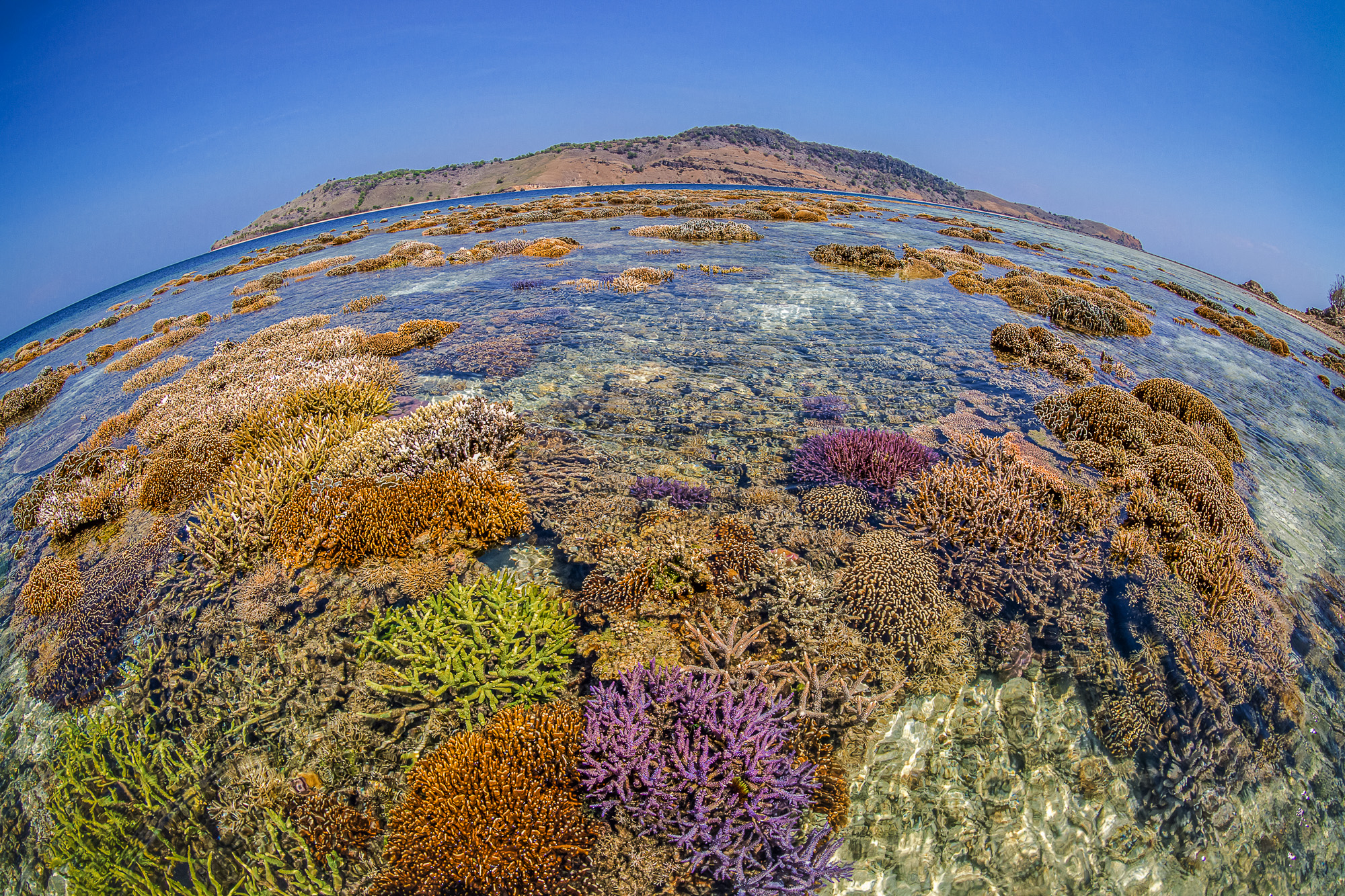 A book
+ 1 print (100x150cm)
+ 1 certificate of adoption of a transplanted coral to restore the reef on Hatamin Island in Indonesia (certificate sent by e-mail).

40 books sent to your home.
+ 1 certificate of adoption of a transplanted coral to restore the reef on Hatamin Island in Indonesia (certificate sent by email).
+ Invitation to the book launch event
Thank you very much for your support.